Australia may need a post-America foreign policy Plan B

An article by Prof. Anthony Milner 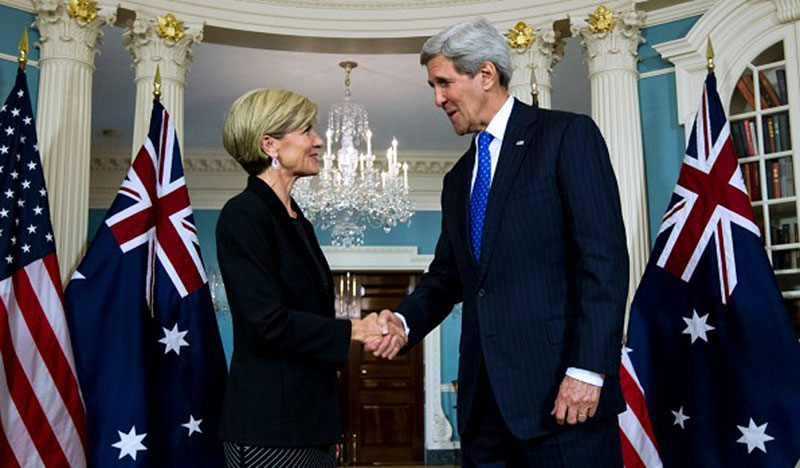 ANZUS is no longer the reassuring presence for Australia that it was. Jose Luis Magana

Is Australia quietly developing a Plan B for our international positioning? For the first time a Singapore prime minister has been asked to address our Parliament; soon the Indonesian President will be given the same honour. Last year we signed a "comprehensive partnership" with the other mega-population state in the region, the Philippines.

The way we welcomed the Singapore leader conveyed personal sensitivity and long-term commitment. Australia and Singapore, Prime Minister Malcolm Turnbull said, are "natural partners" and have a "common security outlook". Turnbull also insisted that Australians and Singaporeans – despite their different histories and cultural traditions – possess "similar national characters" – and our relations "spring from the heart, as much as … from the head".

As for Indonesia, Turnbull's visit last November helped relations move beyond drug-related executions, spying accusations and cattle trade issues – with our prime minister insisting the two countries could have a "future that has really the widest opportunities in the history of human development".

This is the type of language we use most frequently when addressing US leaders – and the Australian public (as Lowy Institute polling demonstrates year after year) continues to place the US alliance above any other foreign-policy priority, with some 70 to 87 per cent of Australians insisting on the importance of the alliance for Australia's security.

It has not always been that way. For a century and a half settler Australians viewed the international world – even the Asian region, located so close to us – through the prism of the British empire. With the fall of British Singapore – and the initial US reluctance to engage in the Second World War – Australian leaders were forced to think hard about how to achieve accommodation with the post-colonial states in our region. Both sides of politics wrestled with the issue.

The 1951 ANZUS Treaty – intended to "remain in force indefinitely" – changed everything. The promise that the US would view an armed attack on Australia "as dangerous to its own peace" – though no detail is given as to how far the US would go "to meet the common danger" – gave deep reassurance.

In the following decades various initiatives were taken to build Australia's regional relations – the Colombo Plan, the 1957 Japan Agreement, engagement in the Indo-China wars (and the later refugee resettlement), the leadership on APEC and political transition in Cambodia, the negotiated entry to the ambitious East Asia Summit – but these were not life-and-death endeavours. Working with our great ally, Australia was not a lonely country – we seemed not to need a Plan B.

Today, the US alliance offers less and less reassurance. The United States' radical decline as a trading power is evident right across the Asia Pacific, and in Japan and elsewhere there are growing doubts about US military commitment and capacity. Faced with the contest in the South China Sea, south-east Asian countries are seeking smart accommodation with China – not promoting a US-led, muscular push-back. The Trans Pacific Partnership (TPP) – which many (especially in Japan) saw as a strategy to ensure continued US leadership in the Asia Pacific – is in deep trouble, with even Hillary Clinton pulling back from her earlier commitment. In the case of Donald Trump, the Australian leadership appears to have given up. With Turnbull referring to Trump's comments about women as "loathsome" – and Trump's determination to reduce US international commitments – it is difficult to imagine healthy alliance relations with a Republican US.

Australian public discussion has focused on US-China relations, and particularly whether the US will or will not share primacy. Some leading Australians seek to lobby the US to "maintain its presence in the east Asian time zone", and it is difficult to imagine the US relationship not playing some critical role in Australia's international positioning. But the US, it can be argued, is already undergoing a far-reaching readjustment, and in any case Australia is unlikely to be able to influence the dynamics of major power relations – unless we contrive to do so in concert with others. Opting not to purchase Japan's submarines, whatever the consequences for our military capacity, at least assisted our manoeuvrability – countering the perception that we were locking into a very long-term, anti-China alliance.

Where international opinion does demand effective Australian foreign policy is in south-east Asia. This is the region of Asia closest to Australia, where we are heavily engaged in trade and possess a long record of security initiatives. It is in partnership with ASEAN countries – and perhaps South Korea as well – that Australia might develop a more independent foreign policy. The way in which we are at present deepening relations with Singapore and Indonesia, together with our prudent handling of the difficult political situation in Malaysia, suggests Australia might at last be putting together the elements of a Plan B designed for a possible post-American era – an era in which the US may be powerful but will no longer be dominant. Such planning will mean the type of searching analysis that took place in the late 1940s – before we locked into seven decades of ANZUS.

Anthony Milner is a Visiting Professor of University of Malaya, attached to both the Asia Europe Institute and the Centre for ASEAN Regionalism (CARUM).