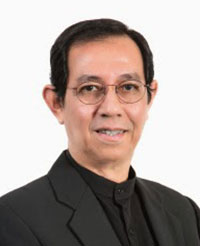 Dzulkifli Abdul Razak (or for short, Dzul) is the 14th President of the International Association of Universities (IAU), a UNESCO-based organisation in Paris. He is the first Malaysian to be elected to the post after its formation more than 6 decades ago. Prior to this, he held the post of the first Vice-President of IAU from 2008-2012. He was the President of Association of Southeast Asia Institutions of Higher Learning (ASAIHL) from 2007-2008, and served in the Executive Council of the Association of Commonwealth Universities (2006-2011).

Currently he is Chair of the Board of Governance at the Islamic Science University in Malaysia (USIM), after being the first holder of the Chair of Islamic Leadership and Principal Fellow at the Faculty of Leadership and Management at the same university (2014-2016). He is also Honorary Professor at the University of Nottingham, and chairs the Steering Council of the Right Livelihood College Global Secretariat based at the University of Bonn, Germany. In 2015, he was made a member of the International Advisory Board to the Global Leadership Initiative at the School of Frontier Sciences, University of Tokyo, Japan and also a member of the Hamburg Transuniversity Leaders Council, a think tank on the future of higher education. His other involvements internationally include being a member of the Asia-Europe Meeting (ASEM) – Advisory Education Hub Committee since 2007.

He was a member of the World Health Organization (WHO) Expert Advisory Panel on Drug Policy and Management from 1995 until 2010 as well as a member of the WHO Scientific Committee of Tobacco Product Regulation (2004-2006). He acted as co-author of the People’s Sustainable Treaty for Higher Education which was launched in conjunction with the Rio+20 World Conference on June 20-22, 2012 in Rio de Janeiro, Brazil. Currently, he advises the Education for Sustainable Development World Group for World Wildlife Fund (WWF), Malaysia.

At the national level, he has served as the 5th Vice-Chancellor of Science University of Malaysia (USM), from 2000 to 2011, and under his leadership, USM gained the APEX (Accelerated Programme for Excellence) status in September 2008. Prior to that in 2005, USM was named as one of the seven pioneering United Nations University Regional Centres of Expertise on Education for Sustainable Development worldwide. Now there are more than 150 such centres globally. In 2007, USM was recognised as a premier research-intensive university by the Ministry of Higher Education.

He was chair of the Malaysian Vice-Chancellors/Rectors’ Council (2002-2011), chair of the Malaysian Examination Council (2005-2011), and chair of METEOR Sdn Bhd, the parent company of Open Universty of Malaysia (OUM) over the same period. Apart from being the first holder of the Chair of Islamic Leadership at USIM, he was Distinguished Visiting Professor at International Islamic University Malaysia (IIUM) from 2011 to 2013, and was a board member of several educational institutions such Perlis Islamic University College, and Selangor Islamic University College. Currently, he is a board member of UCSI University. He was chair of the Merdeka Award Nomination Committee for the Scholastic and Excellence category (2012-2014), and chair of the Prime Minister Innovation Nomination Committee, since 2011.

He has served as member of the Board of Directors of the Malaysia Productivity Corporation (MPC) – formerly known as National Productivity Corporation – since 2008. He leads MPC’s Consultative Panel on Innovation and Creativity, and the Business Transformation Committee for MPC. He has been a member of the Governance Council for Malaysia Innovation Agency (AIM, Agensi Inovasi Malaysia) since 2010. In 2015, he was appointed to the Financial Services Talent Council of Bank Negara Malaysia, and also the Malaysia Anti-Corruption Commission (MACC/SPRM) Advisory Board by the Seri Paduka Baginda Yang DiPertuan Agong.

Dzul has served as a member of the New Economic Advisory Council between 2009 and 2011 which was tasked to craft the New Economic Model for the country. From 2006 to 2010, he was co-chair (Government sector) for the Malaysia Industry-Government High Technology Group (MIGHT).

Dzul is a Senior Fellow of the Academy of Sciences Malaysia (FASc), World Academy of Art and Sciences (FWAAS) and Malaysian Institute of Malaysia (FMIM). He is also Honorary Lifetime member of the Asian Academy of Management.

For his contributions to the field of education, he has received Honorary Doctorates of Science from various universities internationally, for example, the University of Portmouth (2008), University of Nottingham (2013), Mykolas Romeris University in Lithuania (2013), and Honorary Doctorate in Educational Sciences from Istanbul Commerce University (2015), Turkey “in recognition of his exceptional efforts”. In 2014, he was awarded the Golden Jubilee Medal from Al-Farabi Kazakh National University in Almaty, Khazakhstan. His contributions were also recognised by the industry when he was awarded The Most Eminent Brand Icon Leadership Award by the Asia-Pacific Brand Foundation in 2015. He received the Bintang Semangat Rimba (Perak) in 2014 for this contribution to the scouting movement in Malaysia. In 2003, he received the Rotary Gold Medal for Medical Sciences from The Royal Rotary Club of Kuala Lumpur, Research Foundation; while in 1999, he received the prestigious Olle Hanson Award for his contribution to the international community, especially in the areas of healthcare.

He has written weekly columns for Malaysia's oldest daily, The New Straits Times, since 1995, and from 2015, he writes for The Sun, an English daily with the largest circulation in the country. These articles have been compiled into a series of six volumes titled Voicing Concern covering various issues and topics such as education, leadership, sustainable development and, governance and management. His latest publications include: Memupuk Insan Seimbang - Cabaran Kepemimpinan (2014), and the translated version: Nurturing A Balanced Person - The Leadership Challenge (2015), Kepemimpinan Kelestarian berasas Maqasid Syariah (2015), Injecting Soul into R&D – Humanising Science for the Future published by Academy of Science, Malaysia (2015), and Towards Effective Education Planning in Malaysia: Negotiating Tensions and Confronting Challenges (2016), in Eds: Tey Nai Peng, Cheong Kee Cheok, Rajah Rasiah, Revisiting Malaysia's Population-Development Nexus: The Past in Its Future, Kuala Lumpur: UM Press p.121-130. (ISBN978-983-100-841-6)

He has authored several academic titles, and numerous articles in journals and other media, and is regularly invited to deliver keynote addresses, nationally and internationally. At the 2015 Nobel Week Dialogue in Sweden, he was invited to speak at two panel discussions. Recently, he recorded a TEDx talk on Sejahtera available at YouTube.

He is married to Masrah Abidin, and they have four children – Ridzal, Johan, Suriani and Farhana. Their daughter-in-law is Yasyhad and granddaughter, Zahra.