I.S. threat and the way forward 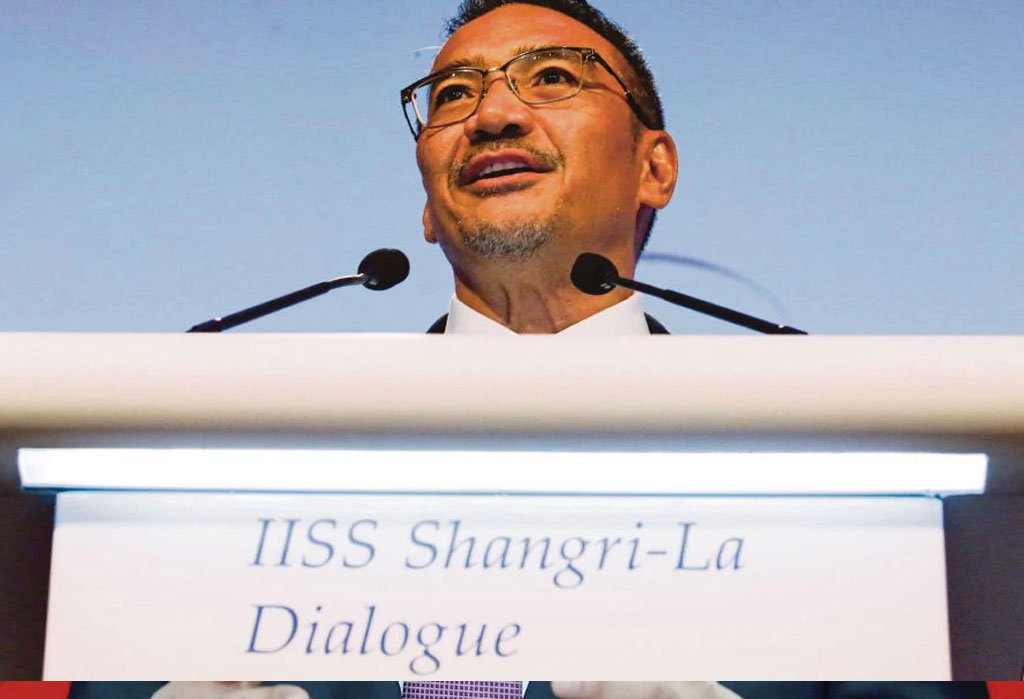 Moderation is key: To overcome the IS threat, we must win the war of ideas; as defeating and discrediting arguments that are used to justify acts of terrorism, said Datuk Seri Hishammuddin Hussein, the Defence Minister and Special Functions Minister in the Prime Minister’s Department. He was speaking at the 16th IISS Shangri-La Dialogue, Third Plenary Session: ‘New Challenges for Crisis Management in the Asia Pacific’ in Singapore last Saturday.

SO, how are we to deal with these challenges? 2016 has left many people with a rather bitter taste. And, the new problems that I just outlined may seem overwhelming, but we should not lose hope.

We must never surrender to evil, we must never give up. Other countries with weaker leaderships would have given up. Many will disagree, but I believe humans, by nature, are essentially noble and inclined towards good.

I believe this because I have lived this: in Malaysia’s darkest hour, during the disappearance of Malaysia Airlines flight MH370 and the shooting down of MH17. There were times when I felt like giving up, there were times I prayed that it would go away, but it was there every morning and I had to address it.

As religion taught us, “God will never give you more than you can handle”. It was during this time of need that our friends from the region and beyond came to our aid without hesitation and selflessly, giving me the spirit to continue.

Old friendships were strengthened while new ones were forged. And we will always be grateful for our neighbours near and far for helping us during the tragedy.

This reminds me of the Malay saying, Ada hikmah dalam ujian, which translates to the trials we face and their blessings in disguise. The coming together that the disappearance of MH370 caused is evidence that nations can still cooperate, that the worst of times can still bring out the very best in us and that adversity can still bring opportunity.

But, we must be clear, this was based on a disaster. The issues I alluded to earlier are much more dire. We would need stronger conviction, unity and cooperation on all fronts and aspects. We simply must do more. Therefore, I would like to propose five solutions to the challenges:

i. Championing moderation both within and across borders;

First, meeting the threat of religious extremism cannot be done by one country alone. The problem, as we have seen, does not respect national borders and thinking that any one nation can go it alone is delusional. Moreover, our focus cannot solely be on “hard” solutions. As I said at the last Shangri-La Dialogue :

I believed this in 2016 and even more this year.

As such, we must also seek to win the war of ideas. It is not enough to stop terrorist attacks — we must also defeat and discredit the arguments that are used to justify them. Moderation is key.

While it has not always been smooth sailing for us, moderation and pluralism have always been at the heart of what Malaysia is. But as I said, we understand that we cannot stand alone.

Towards that end, Malaysia has engaged in several initiatives with friends and partners throughout the world.

The King Salman Centre for International Peace (KSCIP), which is a joint initiative between Malaysia and the Kingdom of Saudi Arabia, has just begun operations four days ago.

The KSCIP will seek to counter terrorism and extremism by promoting peace in our part of the world, working in close contact with other bodies such as the recently launched Global Centre for Combating Extremist Ideology (GCCEI) in Riyadh.

Of course, much more work will be needed to completely defeat the threat of Daesh, but we would rather do the little that we can, than live out the adage that: “The only thing necessary for evil to triumph is for good men to do nothing”.

Remember, evil takes one step forward, when the good chooses to sit silent and do nothing. As much as the problem of extremism is a universal one, like it or not, it has been laid upon the door of the global ummah and we must take leadership in resolving it.

Therefore, it is my belief that today more than ever, it is very important for us to put a united front, building a coalition and a movement of moderates, a host of like-minded nations, to be the voice of reason to counter terrorism and extremism — a principle which has guided Malaysia’s recent overtures in foreign policy.

With like-minded friends on board, burden is shared and courage is multiplied, and this will lead us to the light at the end of the tunnel, Insya Allah. There is no denying that there is evil in this world, but the light will always conquer the darkness.

My second point looking forward is that nations must also commit even more strongly than before to regional cooperation and processes.

But, instead of looking beyond Asean, the foundations of wider security cooperation can be laid via smaller building blocks, such as sub-regional cooperation initiatives.

The key is to adopt a gradualist approach: we should seek to build many small bridges, rather than one large highway.

For instance, Bapak Ryamizard from Indonesia, Secretary Delfin from the Philippines and I are working towards a trilateral partnership that will provide greater security in the Sulu Straits via joint patrols.

This year will mark the 50th anniversary of the establishment of Asean.

While we still have a long way to go in perfecting regional integration, I still believe that the pillars of mutual respect, non-interference and inclusiveness are a model for successful regional partnerships moving forward.

It is now, more than ever, we need to show the world which is full of hate and divide, full of tears and suffering, that the Asean Way — which is far more than just leaders holding hands in photos — does work. Certainly, no other model, despite the inherent difficulties, could work in a region as diverse as Southeast Asia. We must be proud of our achievements, we have gotten this far — being tested on Daesh, the South China Sea and North Korea, but most importantly — we as the Asean states must believe it ourselves.

We in Asean must rise to the occasion and take leadership. All difficulties can eventually be surmounted, so long as mutual trust, respect and transparency remain. Still, it is always better to be a do-er than just a talker, even in regional affairs.

The third solution I am proposing today is that greater confidence and trust can be built through initiatives such as military diplomacy and HADR.

I have often felt that it is vital to connect our serving men and women together, not only to discuss the profession of arms, but to also work together to assist the vulnerable.

The increasing incidences of natural disaster, brought on by our callous neglect of the environment, makes such HADR initiatives all the more necessary. For instance, I have mentioned countless times before with regards to the successes of the ADMM Plus platform in addressing HADR, amongst other various areas of security concern.

In addition, our Asean Military Ready Group (AMRG) established under the ADMM mechanism is another platform that can be explored in forging a practical form of cooperation in HADR.

These measures will, no doubt, help to facilitate integration in our region regardless of the wider global scenario. But, we don’t need to look very far beyond Asean — widespread flooding and devastating mudslides in Sri Lanka have killed at least 200 people and displaced more than half a million. Helping just one person in Sri Lanka may not mean anything to the world, but for that one person, it will mean the world.

Fourth, the challenges posed by the cyber-sphere mean that this must now be regarded as another theatre of defence for our countries.

We should not only seek to defend our people on land, air and sea, but also the Internet. A few countries along with terrorist organisations of all hues are wreaking havoc across the world, displaying their cyber prowess at crippling infrastructure — political and financial — of countries without deploying conventional violent means.

This means that tomorrow’s warrior will be a very different one from today’s. The soldier, sailor and airman of the future must not only be a shooter, but also a coder and hacker. Wars will no longer be won with just bullets and missiles, but also algorithms. Therefore, nations must cooperate to not only crack down on cybercriminals, but to ensure the security of both regional and global cyber-infrastructure.

Finally, leadership. I have always said, that this is an indispensable part of global affairs. Again, the events of 2016 have reinforced this.

If there ever was a time that patience, courage, wisdom, sincerity and a stomach of steel were needed, it is now. Cool heads and measured words may not grab headlines, but they are more likely to contribute to a future of peace and prosperity.

It may not excite your followers. But, it will do more to create a world which their descendants will be grateful to be living in. In the months and years to follow, there may be many incidents where lashing out will seem like the easiest option.

Indeed, these will come again and again. But, if we love our children, then these are the hardships that we must bear. To work patiently, to unite our fractured world, to heal the divide, and to endure whatever tomorrow will bring.

Finally, as I have always said — the only thing constant in life and our world today is change. Referring to the saying: “The more things change, the more they stay the same”.

While everything may appear to be different, but it was, and always will be, part of the same picture, the bigger, ambiguous, picture, which remains the same throughout time.

I would like to end by just saying I am an optimist and I must be, because I am a father and a grandfather to two beautiful boys, Ayden and Adryan.

It is up to us, to build the kind of future that our children will have to live with.

They will pay for our mistakes, our shortcomings and our hesitations.

Let us hope and pray in this holy month of Ramadan, to give us strength as somehow or another, we must be wise but bold. We must find it in us to be all of this and soon — because a better tomorrow must and can only be built today.