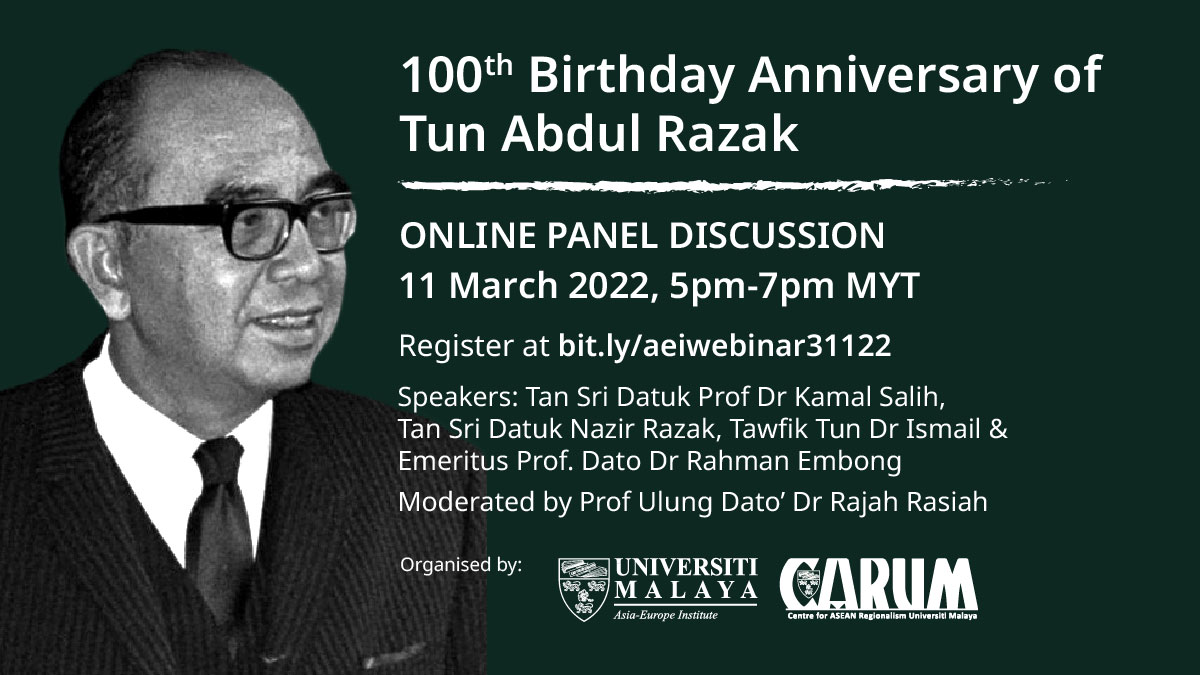 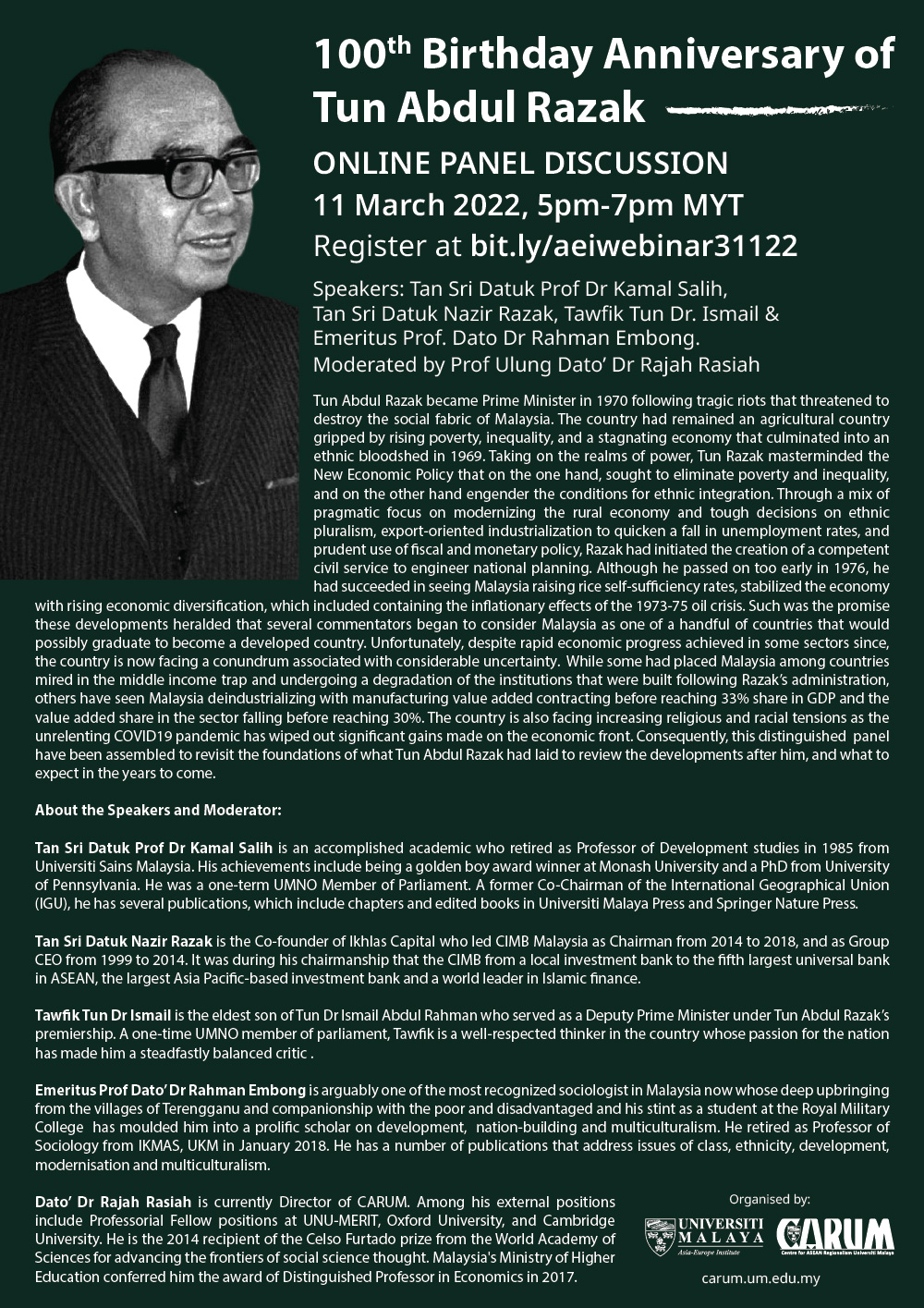 Tun Abdul Razak became Prime Minister in 1970 following tragic riots that threatened to destroy the social fabric of Malaysia. The country had remained an agricultural country gripped by rising poverty, inequality, and a stagnating economy that culminated into an ethnic bloodshed in 1969. Taking on the realms of power, Tun Razak masterminded the New Economic Policy that on the one hand, sought to eliminate poverty and inequality, and on the other hand engender the conditions for ethnic integration. Through a mix of pragmatic focus on modernizing the rural economy and tough decisions on ethnic pluralism, export-oriented industrialization to quicken a fall in unemployment rates, and prudent use of fiscal and monetary policy, Razak had initiated the creation of a competent civil service to engineer national planning. Although he passed on too early in 1976, he had succeeded in seeing Malaysia raising rice self-sufficiency rates, stabilized the economy with rising economic diversification, which included containing the inflationary effects of the 1973-75 oil crisis. Such was the promise these developments heralded that several commentators began to consider Malaysia as one of a handful of countries that would possibly graduate to become a developed country. Unfortunately, despite rapid economic progress achieved in some sectors since, the country is now facing a conundrum associated with considerable uncertainty.  While some had placed Malaysia among countries mired in the middle income trap and undergoing a degradation of the institutions that were built following Razak’s administration,  others have seen Malaysia deindustrializing with manufacturing value added contracting before reaching 33% share in GDP and the value added share in the sector falling before reaching 30%. The country is also facing increasing religious and racial tensions as the unrelenting COVID19 pandemic has wiped out significant gains made on the economic front. Consequently, this distinguished  panel have been assembled to revisit the foundations of what Tun Abdul Razak had laid to review the developments after him, and what to expect in the years to come.

About the Speakers and Moderator:

Tan Sri Datuk Prof Dr Kamal Salih is an accomplished academic who retired as Professor of Development studies in 1985 from Universiti Sains Malaysia. His achievements include being a golden boy award winner at Monash University and a PhD from University of Pennsylvania. He was a one-term UMNO Member of Parliament. A former Co-Chairman of the International Geographical Union (IGU), he has several publications, which include chapters and edited books in Universiti Malaya Press and Springer Nature Press.

Tan Sri Datuk Nazir Razak is the Co-founder of Ikhlas Capital who led CIMB Malaysia as Chairman from 2014 to 2018, and as Group CEO from 1999 to 2014. It was during his chairmanship that the CIMB from a local investment bank to the fifth largest universal bank in ASEAN, the largest Asia Pacific-based investment bank and a world leader in Islamic finance.

Tawfik Tun Dr Ismail is the eldest son of Tun Dr Ismail Abdul Rahman who served as a Deputy Prime Minister under Tun Abdul Razak’s premiership. A one-time UMNO member of parliament, Tawfik is a well-respected thinker in the country whose passion for the nation has made him a steadfastly balanced critic

Emeritus Prof Datuk Dr Rahman Embong is arguably one of the most recognized sociologist in Malaysia now whose deep upbringing from the villages of Terengganu and companionship with the poor and disadvantaged and his stint as a student at the Royal Military College  has moulded him into a prolific scholar on development,  nation-building and multiculturalism. He retired as Professor of Sociology from IKMAS, UKM in January 2018. He has a number of publications that address issues of class, ethnicity, development, modernisation and multiculturalism.

Distinguished Professor Dato’ Dr Rajah Rasiah is currently Director of CARUM. Among his external positions include Professorial Fellow positions at UNU-MERIT, Oxford University, and Cambridge University. He is the 2014 recipient of the Celso Furtado prize from the World Academy of Sciences for advancing the frontiers of social science thought. Malaysia's Ministry of Higher Education conferred him the award of Distinguished Professor in Economics in 2017.