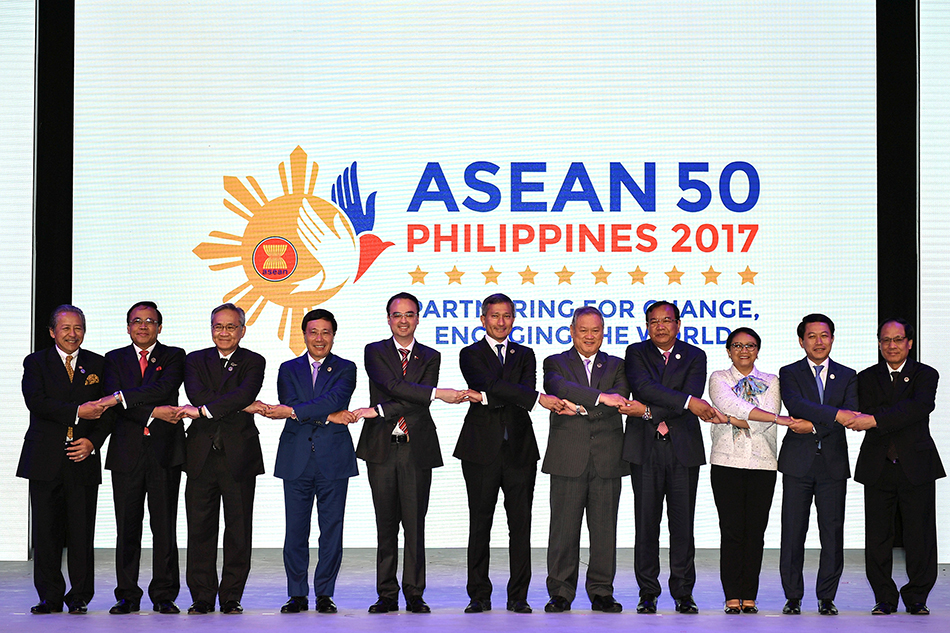 “In our efforts to further our Community Building agenda, we must firstly strengthen our resolve to maintain ASEAN Centrality. We must be able to speak in one voice when projecting ASEAN’s views as well as in maintaining our positions on issues of common concern. This is crucial particularly in light of growing interests from countries and regional organisations outside our region to develop stronger ties and cooperation with ASEAN.

Malaysia is encouraged by the fact that ASEAN, through the Treaty of Amity and Cooperation of ASEAN (TAC), continues to attract the interest from countries globally. With more partners coming forward to engage with ASEAN, we should now better manage our cooperative relations with them.”

“ASEAN Connectivity plays an important role in the community building process and people to people ties. It facilitates the development of a seamless and borderless region, through enhanced regional integration.

Malaysia lauds the efforts to develop Project Concepts for each of the 15 initiatives under the Master Plan on ASEAN Connectivity (MPAC) 2025.”

4.            On the ASEAN Intergovernmental Commission on Human Rights (AICHR), YB Foreign Minister was pleased that “human rights issues under AICHR’s purview have progressed tremendously over the years” and stated “Our strong commitment to AICHR is displayed by the implementation of another Malaysia-led initiative under the auspices of the AICHR in 2017, namely the AICHR Regional Consultation on the Right to Safe Drinking Water and Sanitation which will be held in the 3rd Quarter of 2017 in Malaysia.”

“50 years ago, against the backdrop of the post-colonisation and conflicts in the region, ASEAN was established to ‘maintain and enhance peace, security and stability in the region’. Today, I am proud to say that ASEAN has managed to achieve this goal. In fact, ASEAN has evolved and progressed to achieve so much more than what we aspired ASEAN to be.

In 2015, the establishment of the ASEAN Community signalled our commitment to move forward as one for the benefit of our region and our peoples.

It also profiled ASEAN as an economically successful and politically strategic regional organisation. It brought renewed interest to the region, with major powers knocking on our door, making efforts to nurture and further enhance relations with the region.

Today, through ASEAN-led mechanisms, ASEAN is recognised as the primary driving force in the regional architecture. We have been entrusted to bring together big powers who by themselves could not sit around the table. We have often served as the moderating voice, calling for dialogue and engagement rather than marginalisation and isolation.

We have done well. We should all be very proud of ASEAN. However, I strongly feel that ASEAN should not rest on its laurels. We should not let this be the pinnacle of our achievements. If we do not take stock of ourselves in a frank and honest manner, I fear that ASEAN’s 50th anniversary may also signal the beginning of ASEAN’s slide into irrelevance and obscurity.”

6.            On Regional and International Issues, YB Foreign Minister touched upon the issue of South China Sea and stated;

“South China Sea continues to attract regional and international attention. It is imperative that we uphold ASEAN’s unity and centrality on this matter. In this regard, appropriate language on this matter must be reflected in the Joint Communiqué. At minimum, we must adhere to the language of the Vientiane Joint Communiqué 2016, which made reference to land reclamation, non-militarisation and self-restraint in the conduct of activities.

In addressing the complex and highly sensitive matter, adherence to international law, including UNCLOS 1982, upholding the supremacy of the rule of law, exercising maximum self–restraint in the conduct of activities, and avoiding the threat or use of force, are critical in furthering peace, security and stability, and must be the foundation for conduct and engagement of all parties in the South China Sea.

Maritime claims must be based, addressed and resolved in accordance with international law, including UNCLOS 1982.

We welcome the finalisation of the Framework of the COC. Our officials should expedite the negotiation to ensure the COC could be established in a very near future. In this connection, it is imperative that we establish indicative timelines for the negotiation.”

The Meeting noted the concerns expressed by some Ministers and agreed to ensure that these concerns would be reflected in the Joint Communiqué.

7.            ASEAN Foreign Ministers also discussed the situation in the Korean Peninsula and in the Middle East. YB Foreign Minister reiterated the importance of addressing these issues in a comprehensive manner. As a result, two statements were issued:

7.1       ASEAN Foreign Ministers’ Statement on the Developments in the Korean Peninsula, 5 August 2017; and