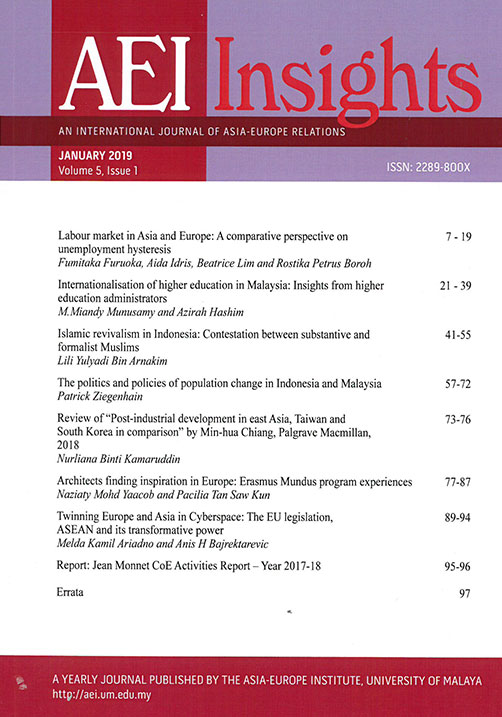 Biographies in the order as authors’ articles appear in the journal.

Fumitaka Furuoka is a visiting senior research fellow at Asia-Europe Institute, University of Malaya. He obtained Ph.D. from Universiti Sains Malaysia in 2002. His research interests include labor economics and international economics.

Aida Idris is an Associate Professor at the Faculty of Business and Accountancy, University of Malaya. Before joining the world of academia, she had worked as an engineer and a consultant in several multinational firms in Malaysia. Her research interests include SME development, entrepreneurship, cross-cultural management, and international education.

Beatrice Lim is a senior lecturer at the Faculty of Business, Economics and Accountancy at Universiti Malaysia Sabah. Beatrice obtained her PhD in Economics from University of Wollongong in 2017. Her research interests include labor economics and gender studies.

Miandy Munusamy is an Administrative and Diplomatic Officer of Public Service Department, Malaysia. He joined the Policy Coordination and International Division, Ministry of Higher Education Malaysia (MOHE) in April 2009 as a desk officer for multilateral cooperation. In September 2017, he started his Doctorate study at Asia-Europe Institute, University of Malaya. His research is on Internationalisation of Higher Education in Malaysia and The ASEM Education Process.

Azirah Hashim is Professor of Linguistics at the University of Malaya and currently, Executive Director of the Asia-Europe Institute, University of Malaya. Her research interests include Academic and Professional Discourse, Language Contact in SE Asia and Higher Education in ASEAN. Her publications include co-edited volumes, ‘Communicating with Asia: the future of English as a Global Language’ by Cambridge University Press and ‘International Arbitration Discourse and Practices in Asia’ by Routledge, London and articles in World Englishes, Text and Talk, Multilingua and Discourse Studies.

Lili Yulyadi Bin Arnakim is currently a Faculty Member at the Faculty of Humanities and attached at Department of International Relations, BINUS University, Jakarta as Lecturer Specialist, and a visiting professor at the Asian- Europe Institute (AEI), University of Malaya. His current research project is on Revisiting “Development” in Developing Countries: A Comparative Study between Southeast Asia and Latin America.

Nurliana Kamaruddin is currently a Senior Lecturer at the Asia-Europe Institute, University of Malaya. She earned her PhD in International Studies majoring in Development Cooperation at Ewha Womans University, Seoul and her Masters in International Cooperation at Yonsei University, Seoul, South Korea. She teaches East Asian Society at the undergraduate level in the East Asian Studies Department, and Political Security Agenda of ASEAN at the Masters level in Asia-Europe Institute, University of Malaya.

Naziaty Mohd Yaacob is an Associate Professor at the Department of Architecture, University of Malaya. She obtained her doctorate in 2009 from the University of Salford, UK. She teaches architectural design, theory and philosophy, architectural research and universal design. Naziaty is a disability advocate in Malaysia since 1998. She was one of the National Council Member for the Persons with Disabilities Act 2008 for the first two terms, expert reference in Accessibility and Universal Design for UNESCAP. In 2015, she founded ZaSve currently a pre-startup business entity under UM Innovations Sdn. Bhd.

Pacilia Tan Saw Kun is a Graduated Architect registered under Board of Architect Malaysia since 2012. She obtained her Bachelor of Architecture in 2011 from University of Malaya and her Master in Architecture and Preservation from Polytechnic University of Milan in 2016. She was one of the blogger during the Milan Expo 2015. She is working in a medium-size architecture firm as a Project Architect, fully hands on with various scale projects from private single bungalow to high-rise apartment in different phase of development.

Anis H Bajrektarevic is chairperson and professor in international law and global political studies, Vienna, Austria. He has authored six books (for American and European publishers) and numerous articles on, mainly, geopolitics energy and technology. For the past decades, he has over 1,200 hours of teaching on the subject International Law. Two of his books are related to cyber space, cyber law and cyber wrongdoings. Professor is editor of the NY-based GHIR (Geopolitics, History and Intl. Relations) journal, and editorial board member of several similar specialized magazines on three continents. His 7th book is to be realised in New York in December.