Let me begin by expressing my gratitude and sincere thanks to the Asia-Europe Institute and the Institute of China Studies, University of Malaya for jointly holding today’s lecture and inviting me to deliver a lecture on China-Malaysia relations, as one occasion to mark the 40th Anniversary of the establishment of our bilateral ties.

China and Malaysia are close and friendly neighbors with a long history of friendship. The two peoples have had exchanges for more than 2000 years. 600 years ago, the Ming Dynasty kept very close contacts with Malacca when the great Chinese navigator Zheng He led seven maritime expeditions to the then-called Western Seas, five of which stopped over Malacca of Malaysia, leaving many legendary stories. To this day, Zheng He is still remembered as an envoy of friendship and peace, and his merits are widely recognized by people of Southeast Asia, including Malaysia. Since the 18th century, hundreds of thousands of Chinese people went south to the South China Sea. Some of them started their new life in Malaysia. During the 8 years of Anti-Japanese War from 1937 to 1945, many Malaysian Chinese provided valuable support to China. In 1950s, the New China supported Malaysia in its fight for national independence. In 1971, although the two countries had not established diplomatic relations, Malaysia supported China for her return to the United Nations. 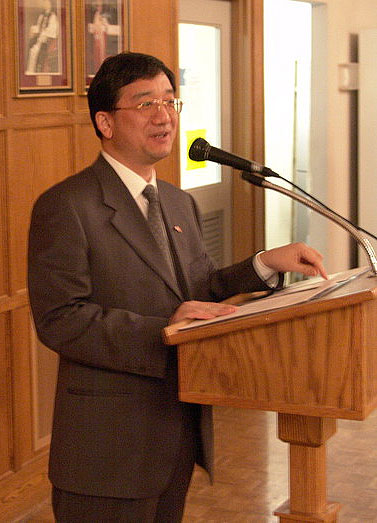 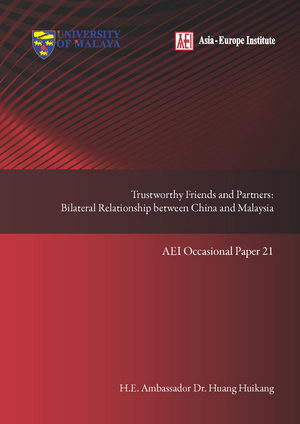 Forty years ago, the visit to China by the late Prime Minister Tun Abdul Razak laid the foundation of our bilateral relations. Malaysia became the first ASEAN country to establish diplomatic relations with China. Tun Razak signed the Joint Communiqué with then Premier Zhou Enlai on May 31, 1974 at the Great Hall of the People. At that time, the world was deeply in the Cold War, so establishing diplomatic relations with China needed great courage and wisdom.

Forty years later, his son, Prime Minister Najib followed his father’s footsteps to visit China in May this year, aiming at carrying our comprehensive strategic partnership to another 40 years. We often refer to the first 40 years as “Golden 40 Years” and we hope that the next 40 years will be “Diamond 40 Years”. This visit was the highlight of the commemoration of the Year of Friendly Exchange between our two countries which attracted wide attention of the whole region and even the international community. Prime Minister Najib attached special importance to this historical visit, especially the celebrations on May 31st. He strongly hoped that he could sign another joint communiqué with Chinese Premier Li Keqiang at the same place and on the same day as his father did forty years ago. Although there were some difficulties on the arrangement, Premier Li happily changed his original full schedule and shared the historical moment with Prime Minister Najib by signing the Joint Communiqué on May 31st at the West Hall of the Great Hall of the People. That was exactly the same venue and date! At that time, many people at present, including Prime Minister Najib and myself touched with tears in our eyes.

In the past 40 years, especially after 1990s, the China-Malaysia relations have developed smoothly. During the visit by Chinese President Xi Jinping to Malaysia last October, he and Prime Minister Najib upgraded our bilateral relations to a comprehensive strategic partnership, which was another historical moment of our relations.

The development in the areas of politics, economy, people-to-people exchanges has made great progress. High-level leaders from the two countries exchange frequent visits, and our political mutual trust is growing through candid and constructive dialogues. After Prime Minister Najib’s visit to China, Speaker of the House of Representatives, Tan Sri Pandikar Amin visited China in June this year. Yang di-Pertuan Agong, Sultan Abdul Halim will pay a state visit to China in early September. Prime Minister Najib will come to China for the APEC meetings. Chinese leaders and senior officials are also planning to visit Malaysia soon. We are confident that, with the trust and close relations between our two leaders, China-Malaysian relations will continue to be at the foremost of China’s relations with ASEAN countries. As Chinese President Xi Jinping said, the China-Malaysia relations have set a good example and model for China’s relations with other ASEAN countries and Malaysia will keep taking the lead.

I have the honour to receive the signature twice from Prime Minister Najib. One is at the Chinese New Year, he wrote to me, “May China-Malaysia relations grow even stronger”. The second is on the celebration album at the banquet of May 31st at the Great Hall of the People. He wrote, “Thank you for making this 40 years celebration so successful”. I felt greatly relieved that I have done my best and fulfilled my dream of making our relations better and stronger.

Over the past 4 decades, as China develops, the economic cooperation and trade are also producing fruitful results. China is now the biggest trading partner of Malaysia and Malaysia has maintained China’s top trading partner in ASEAN countries for six consecutive years. Last year Malaysia became the third Asian country to enjoy a trade volume of over 100 billion US dollars with China. What does that mean? That means China-Malaysia bilateral trade has surpassed that with UK, France, Russia, India and many others. Worldly, Malaysia is China’s 8th trading partner. During Prime Minister Najib’s visit to China, the two leaders made commitments to increase our bilateral trade volume to 160 billion US Dollars by 2017. Qinzhou and Kuantan industrial parks also create a whole new cooperation model in the world, which will attract more two-way investment.

At present, there are around 10,000 Chinese students in Malaysia and more than 6000 Malaysian students in China. We signed an agreement on mutual recognition of higher education and degree. Confucius Institute was established in your University. So I wish all the students present today get to know more of China and also become people’s envoys of friendship. Xiamen University has begun to establish its first overseas campus in Malaysia. Every year, we have 3 million people travel to each other’s country. The two Chinese giant pandas Xingxing and Liangliang have come here and really enjoyed their new home at Zoo Negara. I wish they can have a baby soon, who will be another icon of our friendship. In early July, the China Islamic Culture Expo was successfully held in Kuala Lumpur. Muslims of the two countries had a good opportunity to make religious and cultural exchanges. Quran made of bamboo and calligraphy written in Chinese attracted many of our Malaysian friends. Besides, China and Malaysia are having more and more cooperation in finance, law enforcement and security affairs. We also enjoy close coordination and cooperation in regional and international affairs. Both China and Malaysia attribute to peace, stability, harmony and growth in the region. Malaysian leaders have addressed on many occasions that China’s development brings opportunities to the region.

Looking back into the history of exchanges, we can see that the friendship between our two peoples is the solid foundation of our bilateral ties. A friend in need is a friend indeed. When China and Malaysia suffer natural disasters or difficulties: either the Kuala Lumpur floods, Southeast Asia financial crisis, Wenchuan and Ludian earthquakes, or the MH370 flight incident, the governments and peoples of China and Malaysia always stand side by side and extend warm hands to each other. Among all the overseas private donations for the affected people after Wenchuan earthquake, Malaysia is the biggest donator and Chinese people will never forget your goodwill and help.

Mutual benefit and win-win is the bond of the steady development of China and Malaysia. As developing countries, China and Malaysia have similar views and strategic interests towards many regional and international issues. We oppose the countries outside this region to interfere with Asian affairs. China supports the integration of the ASEAN and will fully cooperate with Malaysia for its being the chair of ASEAN next year.

Looking forward, we are confident that the relations between China and Malaysia will become more mature and the comprehensive strategic partnership will not only bring benefit to the peoples of the two countries, but also contribute to the peace and development of the region and the whole world.

The “Harmonious World” China advocates is quite like Malaysia’s “Global Moderation Movement”. Both provide good ways for the harmonious development of the world. China and Malaysia also advocate mutual respect and harmony between different ethnic groups and nationalities. Our proposals have gained support from all parties including ASEAN countries.

The “Chinese Dream” is closely linked with Malaysia’s “Vision 2020”. The Chinese Dream is for prosperity, peace and happiness of the Chinese people and for contribution to the world. The Chinese dream brings opportunities instead of threat, peace instead of turbulence, progress instead of going backward. “Vision 2020” will lead all the Malaysian people on the path of being a developed and high-income country. We look forward and believe that both the dream and the vision can come true and benefit peoples of our two countries. China, Malaysia, boleh!

In conclusion, as Chinese President Xi Jinping recently said, China sees in Malaysia a trustworthy friend and an important cooperation partner in the region. China is ready to take the opportunity of the 40th anniversary of bilateral relations to find new converging interests, further enrich our strategic cooperation and make new progress in China-Malaysia relations. Therefore, I feel very lucky for being the Chinese Ambassador to Malaysia at such an important time and will try my best to contribute to a further development of China-Malaysia relations with my colleagues and Malaysian friends.