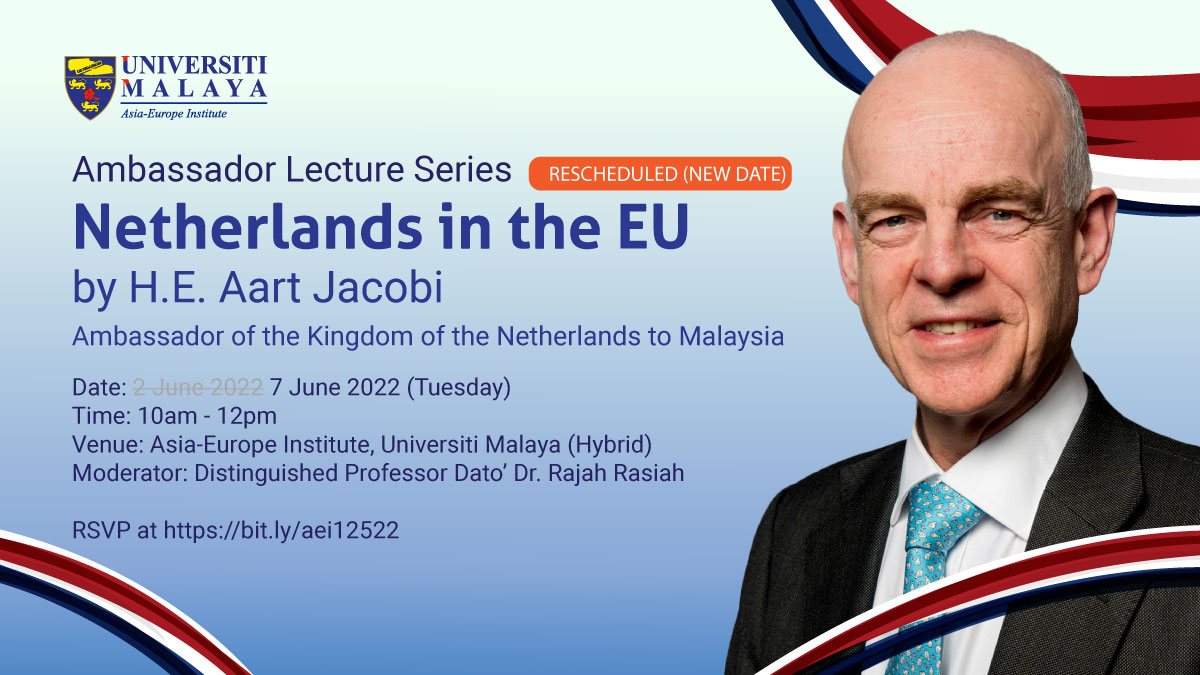 Netherlands in the EU

Speaker: H.E. Aart Jacobi, Ambassador of the Kingdom of the Netherlands to Malaysia

The Netherlands was amongst the founding fathers of what we know today as the European Union. A union with 27 member states and 27 voices that has given the members ample opportunities that led to prosperity, political stability and most importantly no more wars. Also, for the Netherlands these economic benefits are evident, and many realise the country depends on a strong European collaboration whether it is economically or politically.

However, the member states have their challenges looking at how the EU institutions function and how national and European interests can be conflicting. Among the EU citizens a significant part identifies themselves as Europeans however growing eurosceptism and upcoming nationalism is noticed throughout the union.

In the upcoming event, HE Aart Jacobi, will dive into these developments and elaborate on what it means for the Netherlands to be part of the EU.

Ambassador Jacobi grew up in the country side of the East of The Netherlands.

From an early age he showed an interest in affairs beyond the national borders. Aged 17 he joined the Java-China Shipping Lines and for one year sailed between South America, Africa and the Far East.

Inspired by his travels, he chose to study Japanese at Leiden University followed up by a three year Law study in Japan at Kyoto University. During his military service, he studied Russian with the Military Intelligence Department.

In 1983, he passed the selection for entry into the Foreign Ministry and what followed is a career of almost 40 years in Diplomacy. Not surprisingly, almost 18 years were spent in Asia, mixed with three terms at the Ministry in The Hague and postings in Spain and North and South America.

At present, Mr Jacobi is The Netherlands Ambassador to Malaysia.

Before Malaysia, he was Ambassador to Japan, China and Suriname.