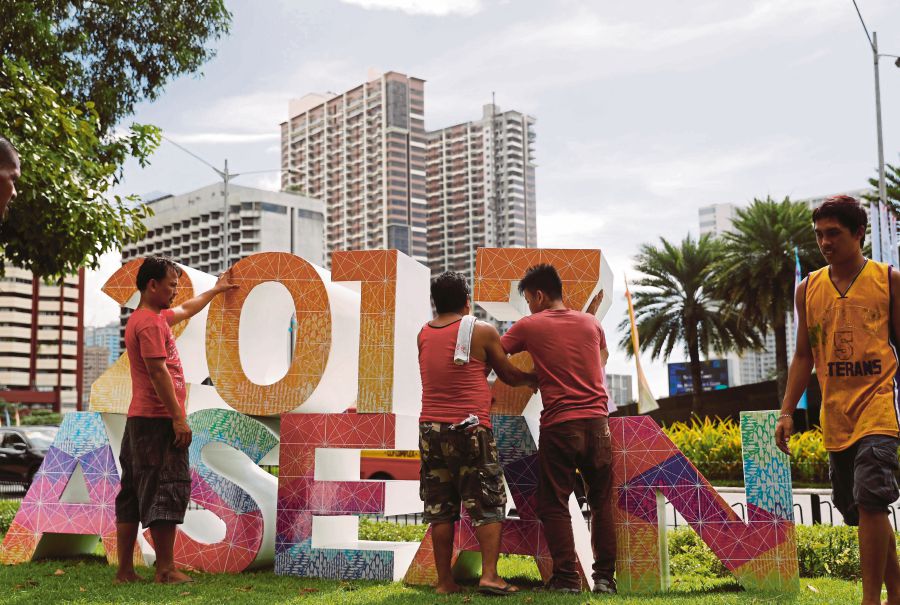 Workers putting up a logo near the venue of the 31st Asean Summit in Manila yesterday. The five-day event begins on Friday. EPA PIC

THE next week will witness the culmination of the Philippines’ chairmanship of Asean as the country hosts the 31st Asean Summit and ceremonially hands over the reins to Singapore, the chair next year. The summit will doubtless present another opportunity to mark Asean’s 50th anniversary and celebrate its many triumphs since 1967.

Yet, as new challenges to Southeast Asia’s peace and prosperity begin to crystallise, it should also be a moment for serious thought about how the region can continue to thrive in the coming decades. It was with the future of Southeast Asia in mind that the Asean Institutes of Strategic and International Studies (Asean-Isis) addressed a policy memorandum to the Asean foreign ministers earlier this year. Isis Malaysia is a member of Asean-Isis, a network of leading think-tanks from each member state.

Titled “The Future of Asean: Meeting the Challenges of a Changing Global and Regional Landscape”, the memorandum aims to do two things: highlight key challenges that merit Asean’s focused attention, and suggest practical measures that will enhance Asean’s ability to respond to those challenges.

In its collective assessment of Asean’s future, Asean-Isis finds that the region is well-placed to remain as an engine of global economic growth. We have high confidence that Asean will collectively be the world’s fourth-largest economy by 2050.

Furthermore, Asean’s good track record in promoting regional cooperation means that it will continue to have a degree of influence over key developments in the broader Asian region.

There are five key challenges that call for the galvanised efforts of all Asean member states. These are of such magnitude and consequence which no single nation can adequately respond on its own.

The first challenge is that we are entering a period of unprecedented uncertainty in the global strategic order. This has been declared many times in the recent past, but it is now undeniable. The end of the “unipolar moment” — the unchallenged global primacy of the United States and its Western allies — is now truly upon us.

A jostle between the big powers for influence in Southeast Asia is already taking place. It is likely to intensify. How Asean moderates these rivalries will be the ultimate test of its relevance in the decades to come.

The second challenge is to sustain the region’s economic vibrancy. While Southeast Asia’s economies will continue to grow above the global average, they will also have to contend with the rise of protectionism around the world.

Heightened sentiments against free trade are not going to go away any time soon. Workers in the West, in particular, are having to make painful adjustments as manufacturing moves to cheaper locations. At the same time, the digital economy, automation and other emerging technologies will result in lower demand for workers.

Southeast Asia — where more than 80 million people will enter the workforce in the period to 2040 — will not be immune from this new reality. This will have consequences for how Southeast Asians assess the costs and benefits of free trade.

The third challenge stems from the profound changes taking place among the people of Southeast Asia. In tandem with what appears to be a worldwide phenomenon, the region has witnessed the rise of toxic forms of identity politics.

In recent months, we have seen the appalling consequences of such a trend in Myanmar’s Rakhine state. Increasingly, combating the rise of exclusionary and extremist politics will require greater dialogue, collaboration and, if I may add, pressure within Asean’s ranks.

The fourth and fifth major challenges respectively relate to the risks from climate change and the growing importance of cyberspace. The reason for singling these out is that both represent threats to critical vulnerabilities and can only be tackled collectively.

Many Southeast Asian countries are particularly at risk from climate change and Asean needs to be in the forefront of global discourse on this issue. And, the need for robust efforts against cyber threats is clearly demonstrated by the recent reported breach of personal data of mobile subscribers in Malaysia.

The recommendations of Asean-Isis focus on three key areas.

The first set of recommendations aim to enhance Asean’s policy and decision-making process. We propose that one of the two Asean summits that are held annually be turned purely into a leaders’ retreat to generate opportunities for interactive, frank, candid and in-depth discussions. Such a retreat would be in contrast to a formal summit where leaders often rely on prepared statements and are saddled with a heavy agenda.

We also recommend that Asean begins a gradual process of identifying instances where it could make decisions or issue statements without the need for unanimity of all its member states. While we think that consensus should continue to be the preferred mode of decision-making, Asean should no longer be unduly hobbled by that principle.

The second set of recommendations seek to strengthen Asean’s institutional capacity. To that end, Asean member states should substantially increase contributions to the Asean secretariat’s budget. The secretariat should also be given the roles of monitoring and publicising how member states have complied with Asean agreements.

The third and final set of recommendations are aimed at sustaining Asean’s economic prosperity. We recommend that negotiations for the Regional Comprehensive Economic Partnership (RCEP), a free trade agreement between Asean and six major economic partners, be concluded as soon as possible.

Asean should also expeditiously move to liberalise trade in services, remove non-tariff barriers and implement trade-facilitating measures. No time should be wasted in realising the aim of turning Asean into a single market and production base.

Ultimately, none of the five big challenges can truly be resolved — that is why Asean needs the capacity to swiftly take advantage of opportunities and mitigate risks whenever they arise. Collectively, the 10 Asean member states must be nimble enough to respond decisively if they can, and adapt if they must.

The need for bold measures have never been greater, given the unprecedented scope and speed of change in the global strategic, political, economic and social environments. These are extraordinary times. It is time for Asean to be bold and extraordinary.

Tan Sri Rastam Mohd Isa is chairman and chief executive of the Institute of Strategic and International Studies (Isis) Malaysia. He is also chairman of Asean-Isis. Shahriman Lockman, a senior analyst at Isis Malaysia, assisted in the preparation of this article.