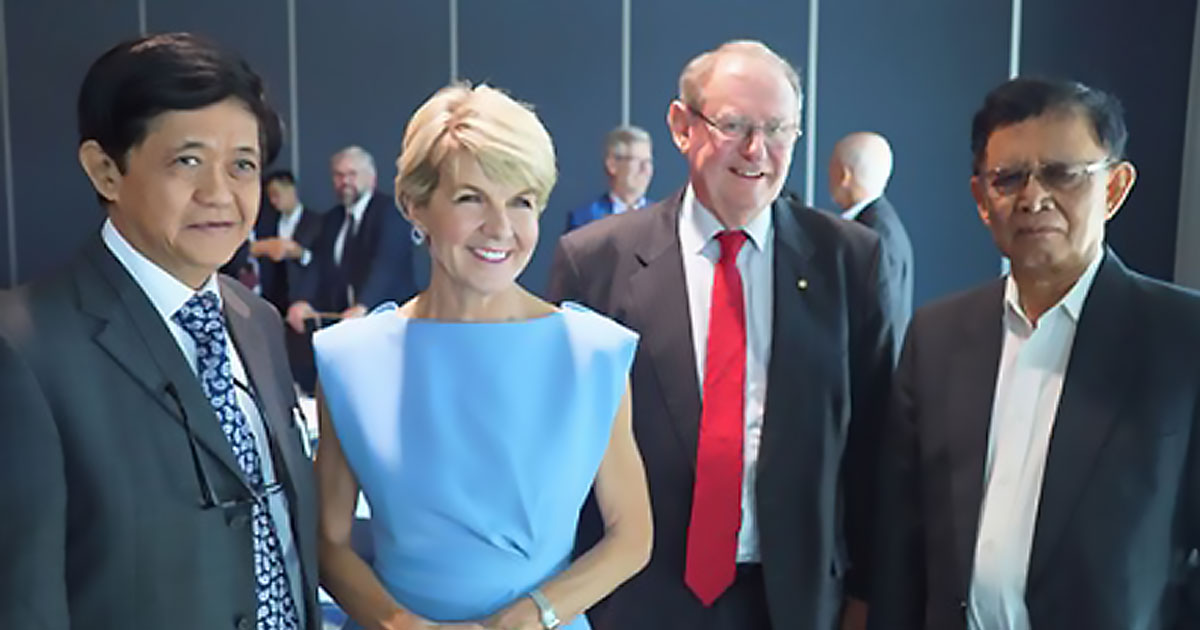 As America becomes relatively weaker and more ambivalent about the value of allies, it makes sense for Australia to work hard on its other regional partnerships. Apart from joining the renewed TPP (now no longer including America), Australia continues to rally support for a rules-based international order, and also promotes an ‘Indo-Pacific’ regional vision, correcting the downplaying of India in previous ‘Asia-Pacific’ initiatives. There is merit in both these campaigns – but real difficulty as well.

Australia engages in the region not only in government-to-government meetings, but also through so-called Track-2 networks. Bringing government officials together with think-tank analysts and other policy-oriented analysts, these networks – including the Council for Security Cooperation in the Asia Pacific (CSCAP) - give Australians additional opportunities to gauge regional viewpoints, and to test Australian policy orientations.

At CSCAP’s meeting in Perth last week, the discussion was sobering. Representatives from India and all the East Asian countries including Mongolia, as well as from the United States and Russia, exposed some regional anxieties about both the rules-based order and the Indo-Pacific vision. The regional participants, many influential in their home society, dialogued not only with Australian CSCAP members but also with a range of Perth-based specialists - including Kim Beazley (Governor of Western Australia), former Foreign Minister Julie Bishop, and former Defence and Foreign Minister Stephen Smith.

In all the cynicism about Australian politics today, it is refreshing to see senior political figures responding carefully and eloquently to regional viewpoints – but the Perth discussions also suggested that the task ahead will be difficult.

The meetings were held under Chatham House rules of confidentiality; but drawing as well on the just-published, multi-authored, CSCAP publication – the annual Regional Security Outlook – it is possible to identify some regional preferences which we have to accommodate.

United States-China rivalry is a preoccupation as, indeed, it should be; and looming large is Vice President Pence’s 4 October speech, in which he accused China of a range of aggressive behaviour in the “great power competition” between the two powers, and insisted that America would defend its interests in advancing “our vision of a free and open Indo-Pacific”.

Some regional commentators see opportunities as well as threat in this increasingly stark competition. Southeast Asian countries may benefit if foreign companies move their production from China to their region. Major power rivalry, in the view of key Vietnamese analysts (writing in the Security Outlook) “creates more room for manoeuvre” for Southeast Asians as Washington and Bejing strive to win partnership and collaboration from them”. Bilahari Kausikan from Singapore makes the point that the world – at the end of the period of US unipolarity – is in “a more historically normal situation of a divided global and regional order and great power competition”.

This said, there is concern, not only in Russia and China, but also in much of Southeast Asia and elsewhere, that advocacy of ‘Indo-Pacific’ is antagonistic toward China. The Vietnam essay in the Security Outlook portrays Washington’s ‘Indo-Pacific Strategy (IPS)’ and China’s ‘Belt and Road Initiative (BRI)’ as rival visions, representing “intensified engagement with the wider region in terms of economic, politics, diplomacy, and defence”. The IPS is “centred on the concept of the Quad” (which is intended to bring together the four democracies – the United States, Japan, India and Australia), and “may sideline ASEAN-led arrangements that prioritise … a more comprehensive approach to security”.

There is continuing strong anxiety in ASEAN about forging alliance-style alignments: the “DNA of ASEAN countries”, according to a senior Indonesian writer in the Security Outlook, “is to forge inclusive cooperation between countries”. They also support the idea of maintaining “equal distance from all the great powers”- and preventing their region from “becoming a theatre of proxy war”. Today ASEANS tend to wish to “benefit from both the US and China” – and if there is to be a serious Indo-Pacific project they want it not to be adversarial (as highlighting a ‘free and open’ Indo-Pacific can be seen to be), but “accommodated in an inclusive platform”. In this Indonesian view, this means the ASEAN-led East Asia Summit – “in which all important powers are members, including the US and China”.

What the Perth discussion and the Security Outlook convey is that despite concerns about China’s behaviour in the international arena – particularly the South China Sea - there is also goodwill toward China, and a belief that the rise of China brings benefit to the wider region. The trade factor is enormous, not just in Southeast Asia but in South Korea - where the “trade volume with China exceeds the sum of its trade volumes with the US and Japan”, and “constructive engagement” of China is also believed to be “indispensable” to building “permanent peace” with North Korea.

In Australia there has been a strong view that the ‘Indo-Pacific’ is primarily a geographic framing device, recognizing in particular the rising importance of India. The CSCAP commentary, however, is a reminder that the concept carries other more controversial significance for many in the region. The notion of an international ‘rules-based order’ is also less straight-forward than Australian official statements and academic commentary sometimes suggest. True, there is support for the idea of ‘rules’ in international behaviour – but reference to a ‘liberal rules-based order’ is seen as pointing to some pervasive ideological bias. Also, the insistence that alliances are a part of this order – as some Australian leaders have done - fits uncomfortably with ASEAN international preferences.

Exactly what a ‘rules-based order’ includes is a matter of debate. ASEAN has its own ‘norms’ of behaviour – and one ASEAN comment was that a ‘rule’ is simply a ‘norm’ that has been written down. One question is how to balance ASEAN’s opposition to alliances, stress on inclusivity, preference for consensus decision-making, and bias toward informal dialogue rather than legalistic sanctions against the very different foreign-relations thinking that is influential in the United States and Australia.

There is wide agreement that many countries, including China, have benefited from the international order established in the period following World War Two – but the great transition in global power underway today has far-reaching implications. Most observers instinctively sense that moving to a new order is a fearsomely daunting undertaking, especially as we are not coming out of a major war with a clear winner who has the muscle and the moral authority to offer new solutions. Henry Kissinger has argued that the future international order will involve not just a shift in power from the US to China but also a new “agreement on norms”- and he is uncertain whether it will be “possible to translate divergent cultures into a common system”. An understandably popular stance is to keep it simple, staying clear of ideology and focussing initially on trade and investment regimes. But even here, divergent philosophies of governance darken the horizon almost instantly.

As discussion proceeded in Perth, it was clear that Chinese perspectives need to be negotiated not only in respect to maritime relations (with particular reference to the South China Sea), but also in numerous economic areas (for instance, dispute settlement and other mechanisms in the Belt and Road Initiative, and interpretation of such concepts as ‘market system’ and ‘free enterprise’). Reviewing and perhaps revising the rules-based order may be especially difficult as a government-to-government or Track One context – and CSCAP is therefore considering the advantages of undertaking exploratory investigation and deliberation as a Track Two project.

As Australia pursues such regional initiatives as the rules-based order and the ‘Indo-Pacific’ vision, there can be no doubt about the importance of gauging the strength and texture of regional opinion, and of making judicious judgements about whether to accommodate or debate differences.

The Regional Security Outlook 2019 publication is available from the CSCAP website.