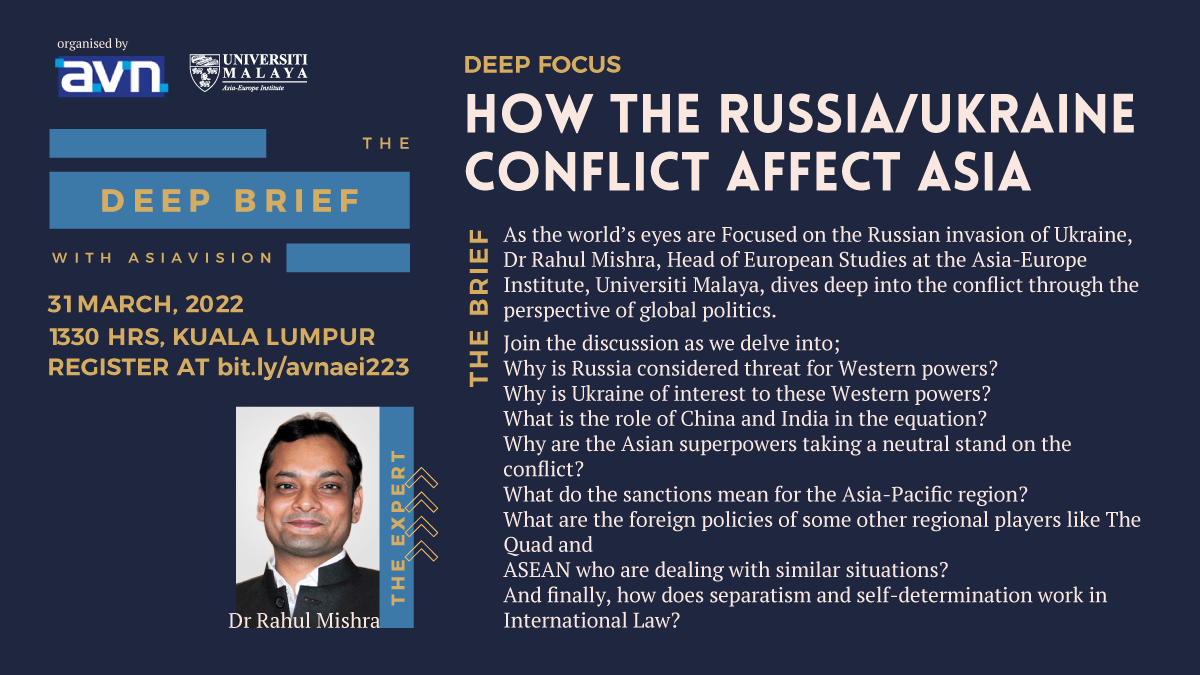 The Deep Brief With Asiavision

where journalists, academics and experts gather to change the worlds - one forum at a time!

THE BRIEF
As the world’s eyes are Focused on the Russian invasion of Ukraine, Dr Rahul Mishra, Head of European Studies at the Asia-Europe Institute, University of Malaya, dives deep into the conflict through the perspective of global politics. Join the discussion as we delve into;
Why is Russia considered threat for Western powers?
Why is Ukraine of interest to these Western powers?
What is the role of China and India in the equation?
Why are the Asian superpowers taking a neutral stand on the conflict?
What do the sanctions mean for the Asia-Pacific region?
What are the foreign policies of some other regional players like The Quad and ASEAN who are dealing with similar situations?
And finally, how does separatism and self-determination work in International Law?

DR. RAHUL MISHRA
Dr Rahul Mishra is a Senior Lecturer and Coordinator (European Studies programme) at Asia-Europe Institute, University of Malaya, Malaysia. He is the Managing Editor of AEI Insights – the Institute’s peer-reviewed journal. He is also an Associate at the Centre for ASEAN Regionalism, University of Malaya. Prior to this, he was a consultant with the Foreign Service Institute (FSI), India’s Ministry of External Affairs. He has worked with India’s premier think tanks – IDSA and ICWA - for four years each. Recipient of the Asia Fellowship of the East-West Center in Washington D.C., Korean and Australian Government Fellowships, he was previously affiliated with the RSIS and the National University of Singapore as well. Dr Mishra specialises on politico-security affairs of Southeast Asia, the role of major & middle powers in the Indo-Pacific, and the ASEAN-EU regionalism. His latest publications include Asia and Europe in the 21st Century New Anxieties, New Opportunities (Routledge, 2021), and India’s Eastward Engagement from Antiquity to Act East Policy (SAGE, 2019). He has published five books, several articles, and more than 200 opeds in newspapers such as the New Straits Times, Financial Times, Japan Times, Jakarta Post, Indian Express, The Star (Malaysia, and Kenya), ASPI, RUSI, etc. His more than 100 TV appearances include media platforms such as BBC, Deutsche Welle, CCTV, Channel News Asia, Phoenix TV, etc. He is a weekly columnist with Deutsche Welle, Germany.