Given at the Asia Europe Conference, Asia Europe Institute, University of Malaya, 2 August 2019

Thank you Professor for your kind words of introduction. Very happy to be here.....I should begin by saying the obvious - as an open economy which is located at the heart of Southeast Asia, multi-ethnic in its composition and strategically vulnerable - separated as West Malaysia and Sabah and Sarawak are by the South China sea - it is in our fundamental interest to see that there are as many players as possible in the region, interacting with one another on the basis of transparent rules and norms. So this is what Malaysia’s game plan is all about. This is how we promote strategic ballast - how we seek to maximize strategic space. This is something which I do not think will change in the foreseeable future. 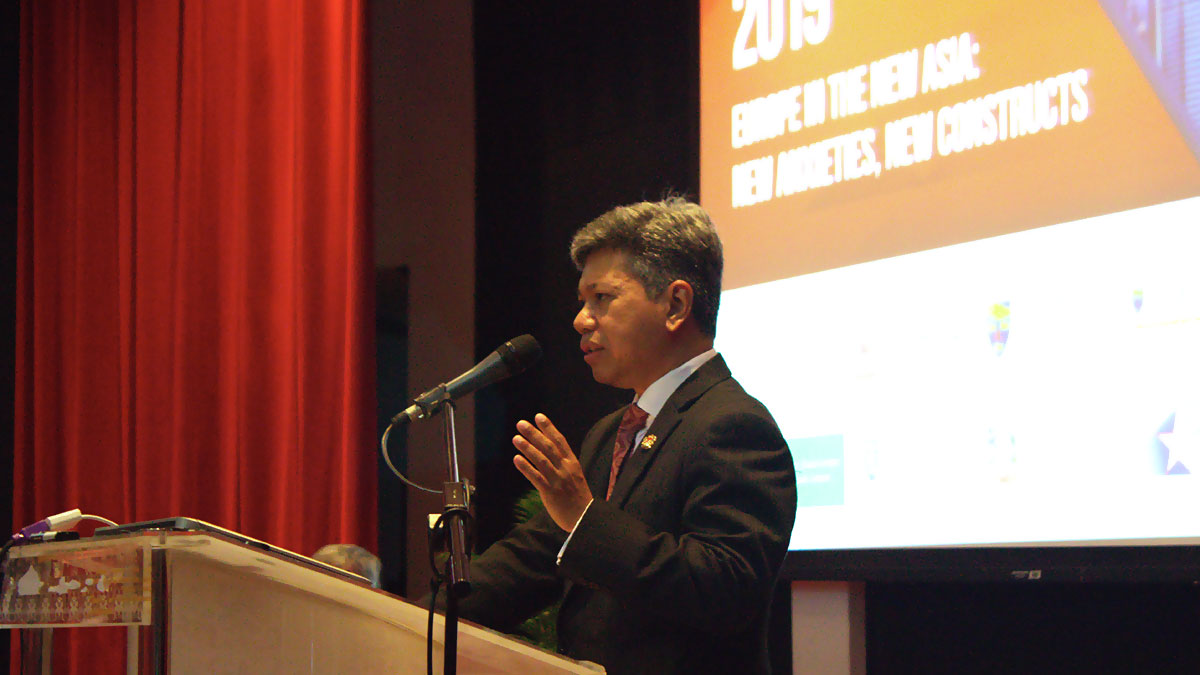 I would like to say a couple of words on the theme of the conference before addressing what Professor Rajah Rasiah mentioned in his introduction. In talking about Malaysia’s game plan as an open economy, I would emphasise that it is quite important that major players in the world - including Europe - are engaged fully with the region. Having said this, I have to say that sitting from where I am right now, I have a sense that both Europe and East Asia do not know each other well enough. We are changing in very many and significant ways. In Europe we are seeing the phenomenon of ageing population, immigration, fraying of the transatlantic ties, Brexit, and the evolving relations with Russia - as well as dynamics within member states of the EU. For East Asia, of course, we see the rise of China - I prefer to use the term re-emergence of China, and I will say a couple of words on that later on - as well as rapid economic growth, nation building, regional integration, and further integration into the global supply chain. These are very significant interchanges and evolutions which both Europe and East Asia are facing. We also have many common interests. The most important one of all is a fundamental interest in maintaining a rules-based international order. That is increasingly difficult given the evolving nature of the transatlantic ties - and I am going to be very honest with you. Not a lot of people will say this, but the international rules-based order since the end of the Second World War has been underwritten by the US and Europe. A fraying of these ties will affect the maintenance of the rules-based international order, both in its operation as well as in the idea that it stands for. What is happening vis-a-vis US-EU relations is therefore something of concern to very many of us in Southeast Asia.

So we have to work closely together, Europe and East Asia. But as I mentioned, we do not know each other that well - and I suspect that the lack of knowledge is greater on the part of Europe. Europe does not know East Asia as well as East Asia knows Europe - and even our knowledge of Europe is pretty sketchy, and I suspect in very many ways fundamentally flawed. So I think the theme of this particular conference is important in addressing this ignorance. I am curious, however, about the conference's specific theme: Europe in the New Asia: New Anxieties, New Constructs. 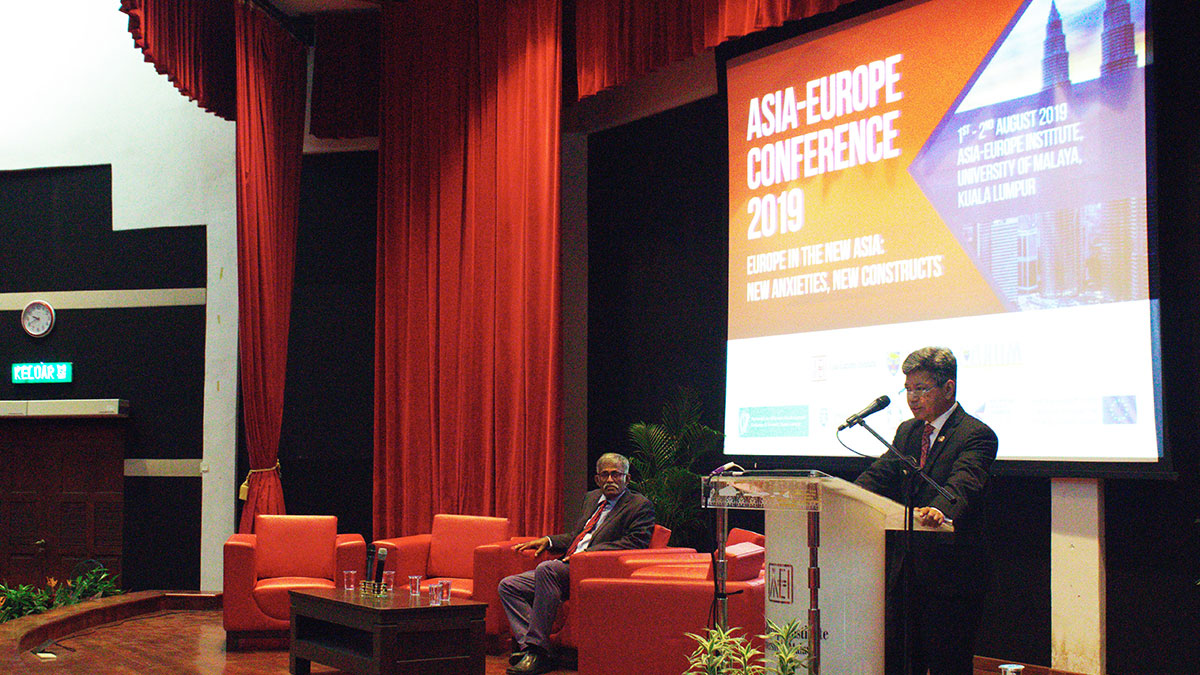 First, I do not think it is a new Asia. It is the re-emergence of the old East Asian order which predated colonialism. It is characterized generally by interdependence between Southeast Asia, China and India. What is different now is that there are new actors in the region - the US, Australia, New Zealand and Europe among others. I have always felt that it is countries in the latter category which must adjust to the old-age regional realities which are reemerging at the present moment. As these countries do adjust to these realities, I think they will begin to understand that where China is right now, and where India is right now - and where they are likely to be in the future - is in the natural order of things. This is how it has been for thousands of years and it is how it is going to be for the next thousands of years - and this is the reality. 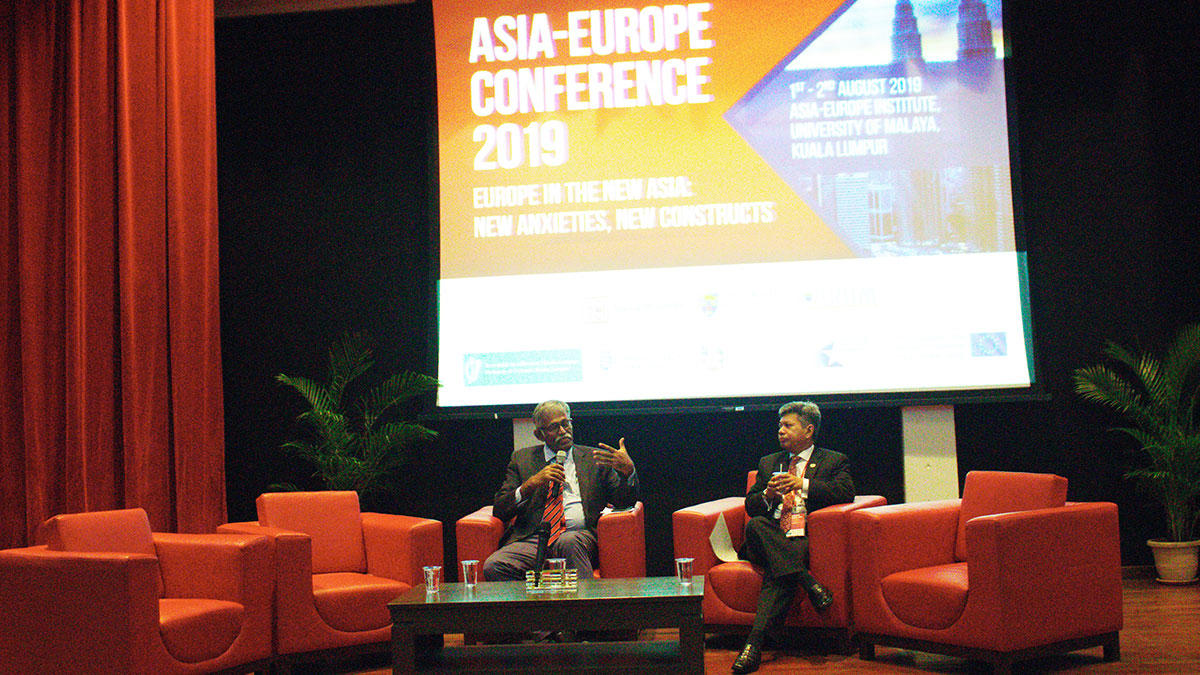 Moderator of the day, Distinguished Professor Rajah Rasiah, was having discussion with YM Raja Dato’ Nushirwan Zainal Abidin on stage

The other point that I like to make is there is a view that, in general, countries in the East Asian region are merely passive recipients of the projection of power from overseas. That’s not the case. I would like to think that at least in the Malaysian context, we have the power of agency - and I can assure you, when I do my job managing bilateral relations between Malaysia and other countries in the world, it never crosses my mind that if I recommend that we take a course of action which is seen to be beneficial to China, we need to ask what would Americans think. It never crosses my mind. I will deal with China on the basis of our mutual interest and I will deal with the US on the basis of our mutual interest - without the views of the other impinging on my calculations. So when a lot of people say that in the East Asian context, "to choose is to lose" and stuff like that - this is a false dichotomy. I never choose. I do not need to. I need to manage bilateral relations with both China and the US - and also India and others - without taking into consideration the views of others. If they did have a view - and I can guarantee you that no American has come to see me to complain about the way that we are dealing with China - I would explain to them that this is how it is. I would equally give the same explanation to the representatives of the UK or France - or whatever - who may have an interest in the way that we manage our relations with China.

I am not, however,  fixated on these things and I suspect that very many of my counterparts in Southeast Asia will say the same thing. So I am quite surprised that people make the argument that for us in Southeast Asia, it’s like a fixation that we need to balance our relations with China with the US. From my perspective, I do not view it that way.

And for my friends in Europe and elsewhere, once you accept the reality that great powers will have global ambitions and that countries in the East Asian region - in Southeast Asia particularly - have the power of agency, the sooner you accept these realities, the sooner your new anxieties will go away. This is how it is.

My third point addresses the question - is there a need for a new construct? I do not think so. I think we should build on existing realities or mechanisms - to take into account new realities. Many of you have analysed I am sure in great and graphic detail the ASEAN Outlook on the Indo-Pacific which I think is pretty instructive. I want to tease out four central points of this document because all ASEAN documents are very wordy.  The four main points are the following: first, is that this Outlook actually reinforces the existing ASEAN-centered regional architecture. This is the aim. Secondly, there are no new mechanisms but rather the Outlook is to enhance community building efforts and to strengthen existing mechanisms to better face present realities. Thirdly, the emphasis is on existing principles - ASEAN centrality, rules-based framework, openness, non-intervention and so on. Lastly, the Outlook identifies new areas of cooperation, the SDGs (sustainable development goals), for example. So nothing new in that.

In the games that diplomats play, it is sometimes important to put new wine in old bottles. It is sometimes a matter of what things need to be said - and it is important how you say it, and in what particular context things are said. I believe that the ASEAN Outlook on the Asia-Pacific fulfills all of these needs.

As we talk about new constructs, let’s not stray away from fundamental questions. Firstly, what are the aims of these constructs and secondly, have these aims been achieved? I suspect that for the latter, these have generally been achieved. After all, the aim of regional security architecture is to ensure peace and security in the region. This has been achieved. We need to tweak it to ensure that it’s relevant for the times and we are doing exactly that. 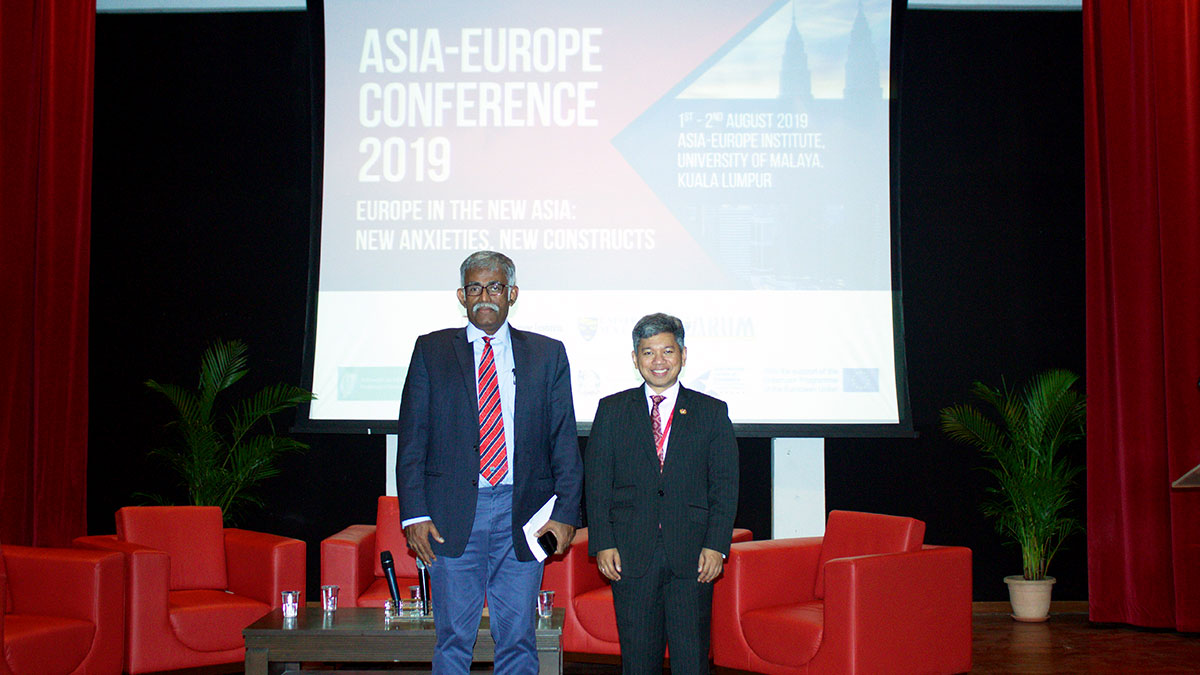 At the end of the day, all diplomacy is personal diplomacy.  This is a truism, I think shared by very many diplomats who believe you have to understand ordinary human beings, what motivates them, and what their passions are - because these impulses are exactly the ones which motivate national interests, and the way nations project themselves on the world.

People come to me for one reason or the other with the view that Malaysian knows how to deal with China. I do not know whether we do - but I am very happy to string them along, allowing that it is indeed the case. They ask me what does China want, what does China as a country of 1.4 billion wants? Of course you can have a very simple explanation and you can have a very complicated explanation. But I say to them that a simple answer is that China wants exactly what individual human beings want. They want respect. They want respect born out of their position in the world, their contributions to the world, their strength in the global economy, their military and so forth. To the extent that you show them respect and they respect you, we get along pretty well. I think in the Malaysian case, this is - touch wood - our experience so far.

I have been given half an hour and I will stop exactly there, because one of my mentors said that nobody has hated somebody who delivered a short statement. So I stop there. Thank you very much.