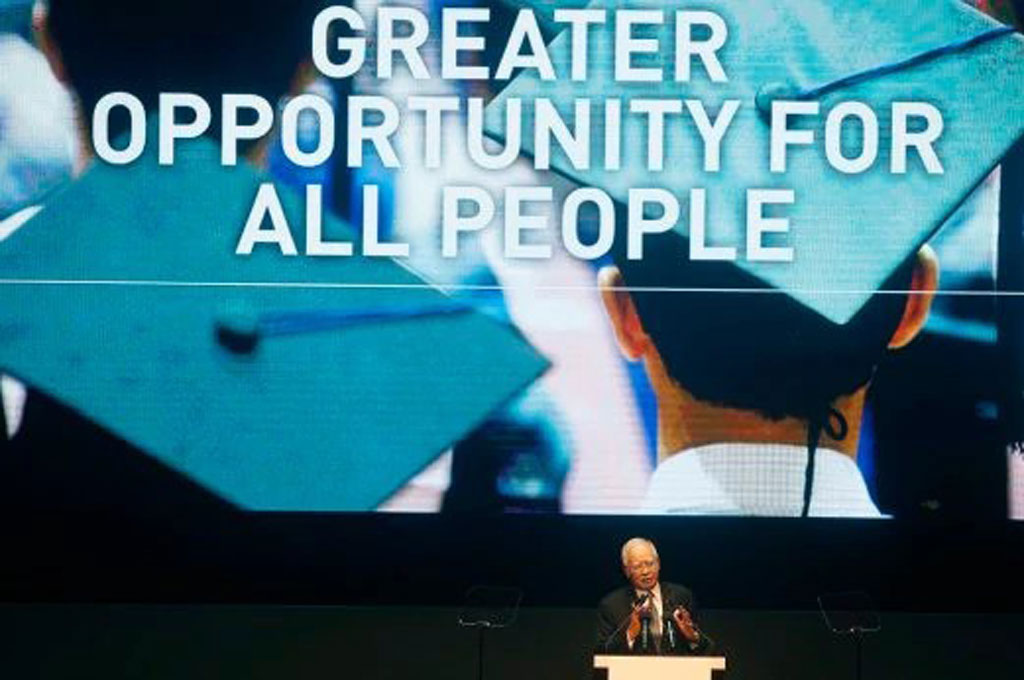 ASEAN Heads of State and Government

1. It is an honour and a pleasure for me to welcome all of you to Kuala Lumpur and the opening ceremony of the 26th ASEAN Summit.

2. Ten years ago, Malaysia filled this hall for the same purpose as today. We are privileged to serve ASEAN once again in a decisive year for our organisation; a year filled with important developments in the areas of community­building, including through deeper economic integration.

3. 2015 will be a milestone in the history of ASEAN. The vision of creating a single community will be realised by the end of December. And it is also our collective duty this year to formulate a successor document to the Roadmap to Establish the ASEAN Community. This will provide the basis for how we further strengthen our unity and deepen our integration over the next ten years, taking us up to 2025. These are two crucial undertakings for charting a bold, inclusive and forward­looking future for ASEAN and its peoples.

4. So it is appropriate that the theme of Malaysia’s chairmanship is “Our People, Our Community, Our Vision”. We want to make ASEAN “People Centred”. This means good governance, higher standards of living, sustainable development, empowerment of women, and greater opportunity for all people.

5. I would like to talk to you about ASEAN itself. ASEAN is a political and economic organisation, and one that is playing an increasingly important role both regionally and globally.

6. But it is also an idea. It is an idea about who we are, as a group of ten nations in South East Asia. And it is an idea, and a vision, that has helped guide more and more of us, as new members joined over time, for 47 years now.

7. It is particularly personal for me. My father, Tun Razak, was one of the five statesmen who signed the Bangkok Declaration in 1967. It was that document that brought ASEAN into being, and although I was only 15 at the time, I remember being well aware that it represented a momentous change in the way the countries in our region dealt with each other.

8. The language in that declaration more than stands the test of time. It states, for instance, that:

“In an increasingly interdependent world, the cherished ideals of peace, freedom, social justice and economic well­being are best attained by fostering good understanding, good neighbourliness and meaningful cooperation among the countries of the region”, which it says are “already bound together by ties of history and culture”.

9. Those inspiring words are as true today as they were then.

10. We must make sure, however, that those ties that bind – and the great idea that is ASEAN ­ are a tangible, personal reality for all of our citizens too. There are many, many instances when they already are.

11. In the on­going turmoil in Yemen, for example, many Malaysians found themselves trapped on the ground. We had to undertake a dramatic evacuation, transporting our citizens from Aden to Djibouti, and subsequently to Jeddah on a Malaysian army aircraft.

12. We evacuated our people alongside ASEAN nationals from Singapore, Thailand, Vietnam, Cambodia and Indonesia. I am happy to report that all are safe. But more than that, I am gratified that similar exercises were carried out by the other ASEAN Governments as well, each rendering assistance to the other’s citizens, as one. That is the spirit of ASEAN.

14. In order to achieve that, we must engage with and constantly listen to them. This is why the Leaders’ programme later today will include a series of four interfaces with different segments of society ­ with youth, with civil society organisations, with business groups and with Parliamentarians.

15. Throughout the year, Malaysia has put in place more people­centred programmes, including the ASEAN Business and Investment Summit, the 1ASEAN Entrepreneurship Summit, the ASEAN SME Showcase and Conference and the ASEAN Young Leaders’ Summit.

16. We are also thinking about our next generation of leaders, and have created a new MTCP­ASEAN Masters Scholarship programme to allow students from ASEAN countries to study in well­established Malaysian public universities and thereafter make significant contributions in their own countries on their return.

17. We believe that ASEAN should publicly recognise and celebrate those outstanding organisations and individuals who have contributed significantly to the community­ building process throughout the years.

18. With this in mind, I am pleased to announce that later this year, at the 27th ASEAN Summit, we will host the inaugural “ASEAN Peoples’ Awards” at which we will celebrate the exceptional achievements of those who are honoured.

19. A People­Centred ASEAN must work for the benefit of our citizens both at home and internationally. Here, the concept of ASEAN Centrality is key. A strong and united ASEAN ­ that is friendly and believes in cooperative engagement with all countries ­ provides the framework for the maintenance of regional peace and stability.

20. There will always be differences – small differences, I hope – between us. That is inevitable in a ten nation group which rejoices in a multiplicity of ethnicities, cultures and religions. But we are used to living with diversity in Malaysia. And we believe the way to iron out any differences of opinion is amicably, with tolerance, mutual understanding and respect. That is the ASEAN way.

21. An ASEAN characterised by internal conflicts could never aspire to be a true community. To be a community, we must address internal conflicts within our region. This is why we are working with other countries to build peace. For example, the recent progress on the Bangsamoro peace process has been so important, and we must not pause in our efforts to bring a permanent resolution to a conflict which has led to so much loss of life and displaced hundreds of thousands over the years.

22. While we continue our engagement and cooperative relationships with countries outside ASEAN, we need to peacefully manage differences closer to home, including overlapping maritime claims, without increasing tensions. Recent developments have raised concerns about the South China Sea – and given the importance of its sea lanes to international trade, it is natural that almost any occurrence there will attract attention. ASEAN must address these developments in a proactive, but also in a positive and constructive way.

23. Respect for international law, including the 1982 United Nations Convention on the Law of the Sea, must be the basis of the rules of engagement and activities in the South China Sea. As Chairman, Malaysia hopes that we will achieve progress in our efforts towards the early conclusion of a Code of Conduct. Ladies and gentlemen,

24. One of the documents we will adopt at this summit is the Langkawi Declaration on the Global Movement of Moderates. It is imperative that we adopt this declaration because even in our region we are not spared the threat posed by extremism. For example, from the advocates of the so­called “Islamic State”.

25. We know that, sadly, some of our citizens have joined forces with those in Syria and Iran to commit atrocities in the name of Islam. They are, of course, tragically misguided, and we wholeheartedly condemn their actions.

26. But it is not enough to state our rejection of provocations and violence. We know from both our histories and our present times that the spark of extremism can too easily be fanned into flames. Irresponsible, rabble­rousing talk can swiftly lead to the persecution of minorities who have been part of the tapestry of our region for centuries. This, too, we utterly condemn.

27. We must put forward a positive narrative of moderation, of hope and of peace.

28. And here in South East Asia, we are not short of such narratives. In Malaysia, we number Muslims, Hindus, Buddhists and Christians amongst our citizens. We know that these differences need not cause enmity.

30. We need to find ways for ASEAN to become – and to be seen to become ­ more politically cohesive. Global investors have long been drawn to India and China. But ASEAN can and should position itself as the “third force” in the region, and more visible unity will help us to do so. One proposal would be if we adopted a common time zone throughout ASEAN. This would be a good symbol of ASEAN unity, and good for business.

31. Our potential, after all, is huge. We already have the third largest workforce in the world. We have a largely youthful, talented and increasingly skilled population of over 600 million people. Our burgeoning middle class makes us one of the most potent and dynamic of regions – leading one publication to ask last week if ASEAN was Asia’s “hottest investment”.

32. International trade has almost tripled in the last ten years, and we are now the fourth largest exporting bloc globally. Our current combined GDP is 2.5 trillion dollars – and that figure is expected to rise to 4 trillion in just five years. The OECD predicts overall annual growth of 5.6 per cent over the next four years, and if current trends continue, ASEAN is set to be the world's fourth largest economy by 2050.

33. This is ASEAN’s time. And that is why it is essential that we continue with the measures to establish the ASEAN Economic Community. Removing barriers to trade, which goes beyond reducing tariffs. It must also include the elimination of non­tariff barriers, such as overly burdensome regulation that hampers free and fair trade. We must accelerate programmes to harmonise standards, increasing capital market and financial integration, and promoting the freer movement of goods, services, investments and talents between our countries.

34. The results of such reforms would be transformative. It has been estimated that if intra­ASEAN trade was boosted from 24 percent to 40 percent, the incremental impact on the ASEAN economy could be 2.5 trillion dollars annually. It would result in a further 7 trillion dollars spending on infrastructure.

35. This potential growth would mean astonishing improvements both to our economies and to the standards of living of our citizens. And those prizes are within our grasp.

36. The founding fathers, through the Bangkok Declaration, envisioned that ASEAN would be “the collective will of the nations of South­East Asia to bind themselves together in friendship and cooperation and, through joint efforts and sacrifices, secure for their peoples and for posterity the blessings of peace, freedom and prosperity.”

37. Those blessings for all our peoples have never been closer. And it is our belief that a truly People­Centred ASEAN, dedicated to forging a Community in which all recognise our commonality and in which the fruits of success are shared by all, has the opportunity to attain them.

38. Let me repeat: this is ASEAN’s time. Let us work together to ensure that the Asian Century is also the ASEAN Century.

39. With that, let me once again extend a warm welcome to all of you, and I look forward to our discussions throughout the next two days.