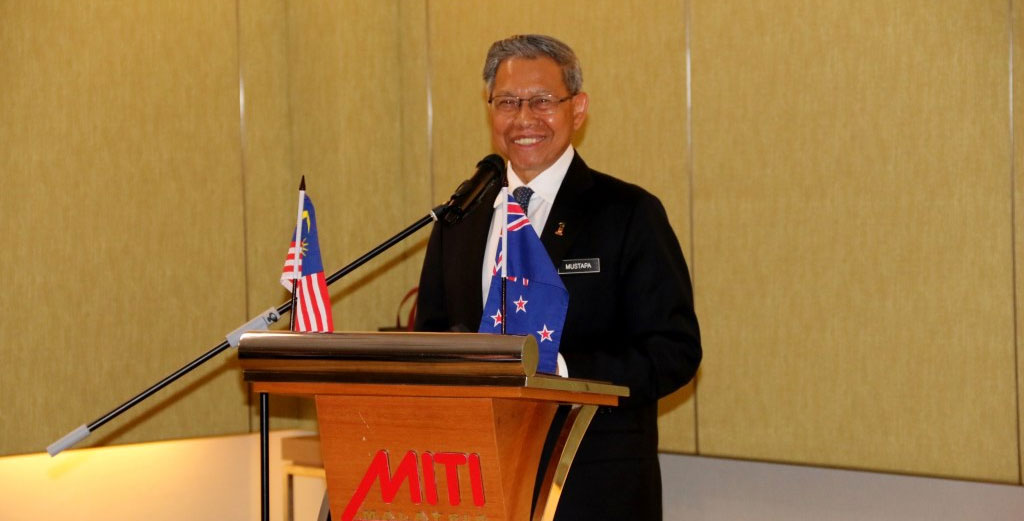 1. Let me first say what a pleasure it is for me to welcome Honourable Todd McClay and everyone to this Forum. Honourable Minister, your presence here in conjunction with the 60th anniversary of Malaysia and New Zealand diplomatic relations will further strengthen the strong ties of friendship that exist between our countries and the people, in particular in business and trade.

2. Throughout the past six decades, we have engaged with each other through a number of different international forums, including the United Nations, and the Commonwealth. And I am pleased to say that our engagements and cooperation over that period have been growing extremely well.

3. For trade in particular, we have engagements through the ASEANAustralia-New Zealand FTA (AANZFTA), which is the first comprehensive FTA signed by ASEAN.

4. And our economic integration will be further deepened under the Regional Comprehensive Economic Partnership, or RCEP, which also includes Australia, China, India, Japan, and the Republic of Korea. RCEP has the potential to deliver significant opportunities for Malaysian and New Zealand’s businesses. The 16 RCEP participating countries account for almost half of the world’s population, which is almost 30% of global GDP and over a quarter of world exports. Therefore, we look forward to its eventual conclusion, hopefully by the end of this year or early 2018.

5. Bilaterally, we have the Malaysia–New Zealand FTA (MNZFTA) which came into force on 1 August 2010. The bilateral FTA can be seen as an improvement to the AANZFTA in terms of services concessions and tariff elimination. By 1 January 2016, MNZFTA has eliminated tariffs on 99.5% of New Zealand’s exports to Malaysia and 100% of Malaysia’s exports to New Zealand. Significantly, this is four years earlier than provided for under the AANZFTA. The Malaysia-New Zealand FTA also offers other benefits. New Zealand companies do not need to obtain Certificate of Origin and facilitation of customs clearance within 48 hours.

7. Malaysia remains pragmatic on the future of TPP, and will seek the views of the other 11 countries including New Zealand on the new direction for TPP.

8. TPP, for Malaysia, is a good example that we are living in a very uncertain times. The world economy is undergoing a very challenging phase. It is in an era of tumultuous transition. Much of the conventional wisdom of the previous century is being challenged in the new world that is emerging in this 21st Century. The online world is disrupting almost all sectors of daily life.

9. As an open economy, Malaysia will not be spared by the adverse effects of the current situation. Over 134 percent of Malaysia’s GDP is made up of trade. Despite the uncertainties in the global economy, I am confident that Malaysia is well positioned to weather the current challenges and emerge stronger than before.

10. In 2016, even in this unsettled times for the global economy, Malaysia registered healthy growth of 4.2 percent. We expect a slightly higher figure this year, and still higher in 2018.

11. The independent international rating agencies continue to give us positive assessments. Moody’s has reaffirmed Malaysia as being in the ‘A’ category, and also pointed out that the Malaysian Government has demonstrated its commitment to fiscal consolidation, with seven consecutive years (2010-2016) of narrowing fiscal deficits.

12. The IMF, highlighted in its latest report that the Malaysian economy continues to perform well, despite headwinds, and has made significant progress towards us achieving high-income status.

13. We have done this by keeping the deficit, inflation and unemployment low, while putting in place policies that are pro-business. We are investing in human capital, technology and infrastructure and focusing on sharpening our competitive edge.

14. Our long-term plans have been not only for the benefit of our people, but also to enhance the ease of doing business for investors. For we know that businesses thrive in a stable, secure and transparent environment that offers protection for their capital and intellectual assets, as well as limiting unpredictability.

15. I reiterate our commitment to ensure that the needs of investors doing business in Malaysia are met. We will continue to provide all the necessary support for a thriving business environment and a competitive, dynamic economy.

16. Back in 1960s, our trade was modest – based on New Zealand’s data, Malaysia’s exports to New Zealand were about £4.53 million of base metal, rubber, canned pineapple and some timbers. While our imports were about £2.65 million, mostly of dairy products. Fast forward to sixty years later now in 2017, much has changed. New Zealand is now Malaysia’s 28th largest trading partner, and Malaysia is New Zealand’s ninth-largest. Our trade in 2016 was about USD1.42 billion.

17. And the goods traded have seen much diversification – Malaysia now exports crude petroleum oil and electronic products such as televisions, and computers to New Zealand. We still import a significant amount of dairy products too, about 35% of these are milk powders.

18. Increasingly our businesses are also progressing beyond import and export of goods and services across borders, to strategic partnerships and investments that leverage the synergies between our two countries.

19. Indeed, I am pleased that this is the case for Fonterra, New Zealand’s dairy company and world’s largest dairy exporter. Fonterra has been in Malaysia for more than 40 years and its operation here in Subang Hi-Tech Park caters to more than 13 markets throughout Asia, the Middle East and Africa.

21. I believe these Malaysian companies have benefitted from New Zealand’s open economy. Over the last three decades, it has gone from being the most regulated in the OECD economies to be one of the least regulated, most free-market based economies.

22. Most impressively, New Zealand is ranked by the World Bank as the easiest country to do business in the World Bank’s 2017 report, replacing Singapore.

23. New Zealand’s experience in diversifying its economy is something to emulate. For example, New Zealand has more than doubled its exports of ICT services over the last eight years. This is exemplified by Datacom Group Limited, a New Zealand’s IT services company, now with operation across 29 countries including Malaysia.

24. Therefore, I strongly believe that the outcome of this Forum will be useful for us to prioritise, rebalance and strategise our efforts to further elevate our trade and investment relations with New Zealand. As we celebrate Malaysia- New Zealand’s 60th anniversary, we can be sure that this partnership will continue for decades to come.

25. On a final note, I would like to express my gratitude and appreciation to Honourable McClay and distinguished participants for being with us this morning. I wish to also express heartfelt appreciation to New Zealand’s High Commission, NCCIM and my team for making today’s forum a success.