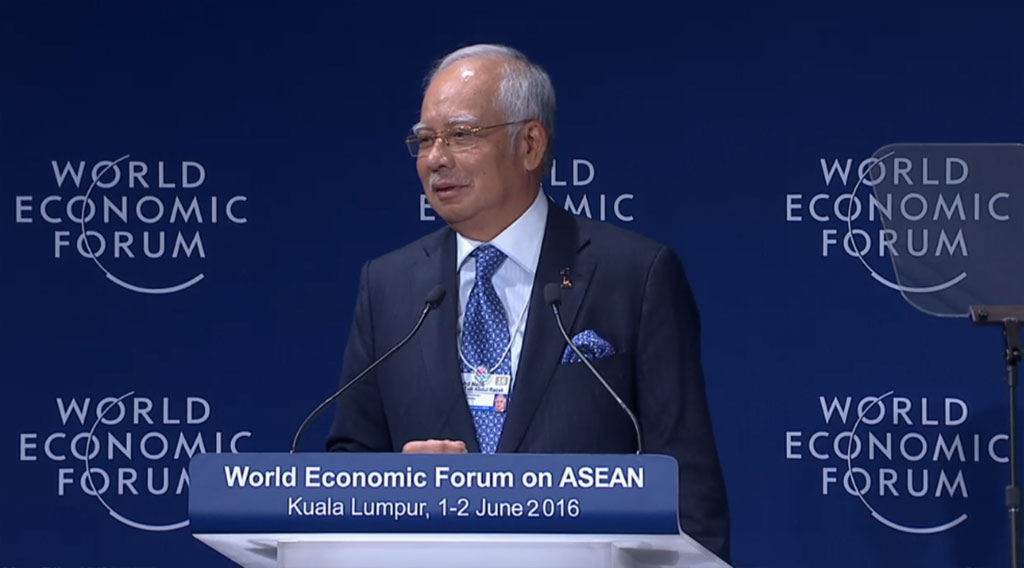 His Excellency Samdech Techo Hun Sen; Prime Minister of the Kingdom of Cambodia,

1.       I am pleased to welcome you all today to the World Economic Forum on ASEAN, and I am delighted that this milestone meeting is not only dedicated to ASEAN, but also that it is being held here, in Kuala Lumpur.

2.         The fact that the WEF has chosen to focus on ASEAN specifically this year is a testament to the growing significance of our region and ten nation association.

3.       With  a  combined  GDP  of  $2.6  trillion,  collectively  ASEAN  is  already  the seventh largest economy in the world, and our 625 million-strong population is forecast to be the fourth largest market by 2050 at the latest – with one global bank predicting we will achieve that status by 2030.

4.       We know what we are, and we know what we can be. The question now is: will we take the necessary steps to reach that goal? Do we have the will and determination to make that dream a reality? How will we ride the wave of the Fourth Industrial Revolution, which WEF has been discussing?

5.       That glittering prize, which is what will allow us to shape the ASEAN Agenda for Inclusion and Growth in accordance with this meeting’s theme, is within our grasp. But the prize must be taken. The great opportunities it promises will not miraculously appear without continued efforts to reform, liberalise and integrate.

6.       What ASEAN can be, its potential, should be our call for action. Will we, the leaders, captains of industry, policy-makers, commentators and NGOs in ASEAN, heed that call? Will we do more to enhance ASEAN connectivity and inclusivity, and at the same time reduce development and income inequality? We would not be doing our duty by our peoples if we do not. And there is much to be done.

7.       First, however, let us remind ourselves of what ASEAN has achieved.

8.       ASEAN overtook China in terms of Foreign Direct Investment in 2013. Last year one publication described us as “Asia’s hottest investment”.

9.       PriceWaterhouseCoopers issued a report which said: “With GDP growth rates that are threatening to overtake China’s, and a youthful, growing and increasingly educated population, the allure of the ASEAN markets is obvious.”

10.     Last  year,  under  Malaysia’s  chairmanship,  we  signed  the  Kuala  Lumpur Declaration on the Establishment of the ASEAN Community.

11.     We reaffirmed our commitment to the ASEAN Charter and past agreements; acknowledged ASEAN’s success in maintaining a peaceful and stable region; and pledged our continued commitment to ASEAN Community-building and to the post-2015 vision.

12.     The first phase of integration necessary for us to achieve the economic pillar of the Community by 2015 helped sustain growth of over five percent over the period 2007-2015.

13.     That is a remarkable achievement, given that during the first two years of that period, economies around the world were devastated by the Great Recession of 2007-2009.

14.     We have virtually eliminated import tariffs. Cross-border trading processes have been simplified, reducing the cost of doing business. Transportation and other infrastructure networks have been improved to facilitate the movement of goods and services.

15.     Pragmatic policy reforms in member countries have transformed ASEAN into an increasingly attractive investment destination for international and domestic investors, with ASEAN becoming a production base for global multinationals and energetic regional companies alike.

16.     Here in Malaysia, we have directly benefitted from the creation of the ASEAN Economic Community. 27 percent of our trade is with ASEAN.

17.    Malaysian banks such as Maybank, CIMB, RHB and Public Bank, and telecommunication companies including DiGi, Maxis and TM, all have deep regional footprints. YTL, AirAsia and Malindo are all regional players.

18.     In fact over 1,500 Malaysian companies are operating in ASEAN. Most of them are locally incorporated and have assumed a local identity or have joint venture partners. They are ASEAN in practice.

19.     Far further afield, people want to do business with ASEAN. We are being courted by the most advanced economies in the world.

20.     Together with Australia, China, India, Japan, the Republic of Korea and New Zealand, ASEAN is actively negotiating the Regional Comprehensive Economic Partnership – an agreement that will see the establishment of a free trade area encompassing almost a third of the world’s GDP with a population of more than 3 billion people.

21.    ASEAN has a key role relating to China's infrastructure-driven alliances, including the formation of the Asian Infrastructure Investment Fund, and the One Belt One Road initiative. We have an official Enhanced Partnership with the US.

22.     Russia   wants   to   advance   relations   with   ASEAN,   and   is   proposing engagement and even an FTA between ASEAN and the Eurasian Economic Union. Canada has intensified its engagement. The European Union is assessing a free trade area, and appointed its first dedicated ambassador to ASEAN earlier this year.

23.     So much attention is being paid to ASEAN – we should be flattered!

24.     However,  in  order  to  realise  the  potential  of  these  agreements  and associations,  it  is  essential  that  we  carry  on  the  process  of  deepening  our Community. And that, ladies and gentlemen, will be a big task.

25.     Removing non-tariff measures is a case in point. According to a recent joint report by the UN and the Economic Research Institute for ASEAN and East Asia, while tariff rates halved between 2000 and 2015, non-tariff measures actually tripled over that time – from 1,634 measures to 5,975.

26.     We need to find more efficient ways of ensuring we recognise each others’ documentation, whether it is for pharmaceutical products, professional certificates, or port entry requirements.

27.     The ASEAN Economic Community will never reach true fruition if we do not work to eradicate these barriers. When we talk about the bright future that ASEAN could have, these are the kinds of issues that have to be tackled in order for us to reach that horizon. They are complex, detailed and require an extraordinary amount of coordination.

28.    This is one of the reasons why the ASEAN Secretariat needs to be strengthened. The annual allocation of around US$17 to US$20 million is inadequate for the Secretariat to drive ASEAN forward, both in terms of integration and agreements with other trading powers.

29.     Likewise,  the  office  of  the  Committee  of  Permanent  Representatives  of ASEAN Member States in Jakarta has to be enhanced to assist with the increasing work load of ASEAN, and for national representatives to be able to cut across borders and agendas.

30.     The tasks involved in harmonising will be immense. We must ensure that the right machinery and funding is there to ensure smooth collaboration, and then to expedite implementation.

31.    Just now I mentioned our youthful, growing and increasingly educated population. Around 65 percent of ASEAN’s population is under 35. We must tap into their energy, their desire to learn and innovate, and we must support and stimulate their talent and entrepreneurship.

32.     We have the ASEAN Young Entrepreneurs Council and Network – one of many superb initiatives of the ASEAN Business Advisory Council. Here in Kuala Lumpur, President Obama and I launched MaGIC – the Malaysian Global Innovation & Creativity Centre, two years ago.

33.    But we must do more to encourage that spirit that dares to imagine new possibilities, new ways of working and living.

34.     Thirty years ago, who would have thought that one day we would all have mobile phones that fit in our pockets – and that most of us would use them to send messages and emails, read books, listen to music, take photos and watch films – and only occasionally to make a phone call!

35.     Now  we  cannot  imagine  life  without  them.  We  want  young  people  from ASEAN  to  have the  ambition  to  create  the  must-have  electronics,  the  new businesses and the everyday technology of tomorrow.

36.     ASEAN’s future is their future, after all. And if it is to be a global future, they must think beyond their home, their region, and believe – and know – that young people in ASEAN are capable of doing just as much, if not more, than those in other parts of the world.

37.     The future is one matter. We must also concentrate on where we are now, and make sure we deliver in the short-term to raise awareness of ASEAN and to provide tangible benefits to our peoples, so that we build the ASEAN Community, both in the minds and hearts of our people, but also in practical ways.

38.     It is high time we ensured there is an ASEAN lane at all major points of entry across our ten nations, and encouraged the setting up of ASEAN food courts, to develop a popular feeling of membership.

39.    We must speed up progress on the Mutual Recognition Agreements that currently cover eight professions. Until qualifications become “portable”, movement of skilled individuals around ASEAN will be seriously hindered and our productivity will suffer. We could start with University degrees, and allowing students to spend part of the degree in another ASEAN country.

40.     As ASEAN has no supranational authority, it is critical that decisions made at the regional level are enabled by domestic laws, rules and regulations.

41.     Immigration departments and professional regulatory bodies must help, and not stand in the way of, agreements on migration of skilled labour in professions such as engineers and architects.

42.     There are many other initiatives that need our determined support, such as the role of Micro, Small and Medium Enterprises in our economic integration and facilitate their participation in the ASEAN economy. This is especially important given that over 95 percent of the enterprises in the region are MSMEs.

In short, ladies and gentlemen,

45.     What is required is nothing short of a complete transformation if ASEAN is to achieve its potential - if we are to continue to be, as David Lipton, the Deputy Managing Director of the IMF put it, “an example for developing countries around the globe that aspire to economic progress.”

47.     There  should  be  practical  initiatives  to  bind  us.  For  example,  Malaysia recently started Go ASEAN, the world’s first ASEAN travel channel that has gained international recognition for the region.

48.     In Malaysia, we have some experience of transformation. After I took office seven years ago, I introduced the Government Transformation Programme and the New Economic Model.

49.     Our  plans  provided  a  sharp  focus  on  how  Malaysia’s  economic  policies needed to change, as well as the reforms necessary in the public sector.

50.     And our plans have worked. They have created 1.8 million jobs, increased Gross National Income by nearly 50 percent, kept inflation low and boosted FDI to record levels.

51.     They also helped Malaysia remain resilient during the global financial turmoil. We continue to record good economic growth, despite the steep drops in the prices of oil and commodities.

52.     We  have  in  fact  “exported”  our  national  transformation  programmes  by sharing our experience with countries in Africa and parts of Central Asia and India.

53.     Now we need the transformation of ASEAN. We have been criticised for moving slowly in the past. That might have been the right pace then, as much of our region recovered from war and division. The ASEAN way may have been steady, but it brought us unity, peace and prosperity.

54.     Today, however, we live in a fast-paced world, and the demographic dividend of young populations will become a liability if we do not take active steps to integrate, innovate and advance.

55.     So set your eyes on what ASEAN can be. Then set your minds on how to empower our peoples to achieve that goal.

56.     Our chance is now. Let history record that we took it, and set ASEAN on course to be one of the brightest stars of the Asian Century.

57.     It is my honour to open the WEF on ASEAN 2016, and I look forward to seeing all of you again at our Welcoming Soiree this evening.