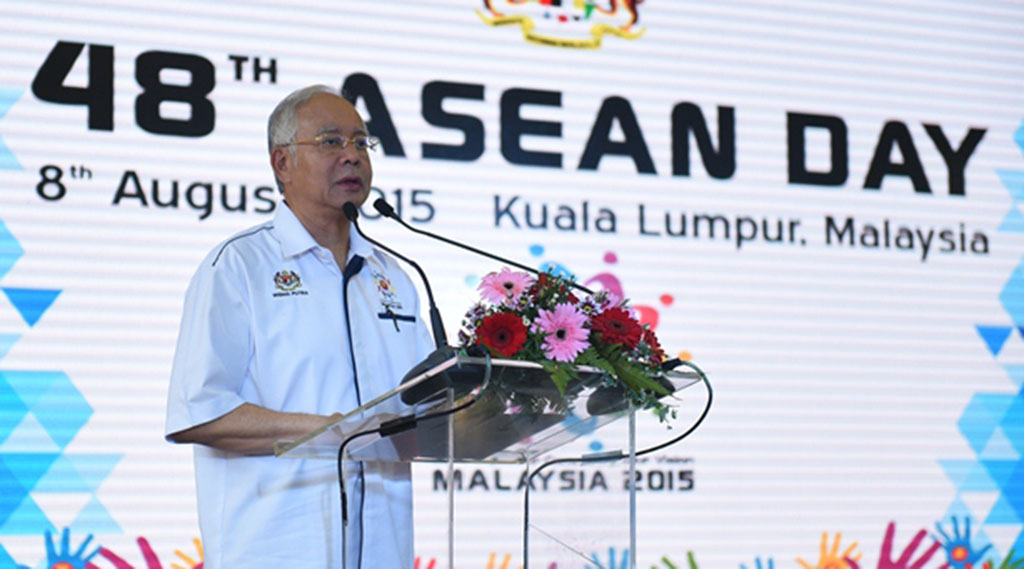 Ladies and Gentlemen, and the young people of ASEAN.

Firstly, let me express my appreciation to YB Dato’ Sri Reezal Merican Naina Merican, Deputy Minister of Foreign Affairs, for inviting me here today to celebrate the 48th ASEAN Day together with all of you.

2.      As you know, this is a day that has a special resonance for me, as my father, Tun Razak, was one of the five founding fathers who signed the Bangkok Declaration in 1967 which brought ASEAN into being.

3.      I was a teenager then, but I was aware that this was a momentous occasion, and represented an important change in how countries in our region thought about each other and dealt with each other.

4.      The declaration bound us to actively promote peace, stability, growth, progress and development, with an emphasis on collaboration and mutual assistance. And since then, ASEAN has contributed towards tangible and significant progress, not only for the region as a whole but also individually for its member states and its peoples.

5.          We are diverse in terms of culture and history, but we came together as one to chart a new approach to regional cooperation. Over the nearly five decades of ASEAN’s existence, there have been many milestones along the way.

6.     In 1976, ASEAN had its first summit, in Bali, Indonesia. Two years later, we had our first ministerial meeting with what was then the European Economic Community. That’s 37 years ago, which demonstrates how long a history ASEAN has of international, region­to­region activity.

7.        Over the following two decades, ASEAN welcomed new members. First Brunei. Then Vietnam, Laos and Myanmar, and Cambodia. In 1994, we established the ASEAN Regional Forum, followed by ASEAN Plus Three and later the East Asia Summit. And in 2007, we adopted the ASEAN Charter.

8.      That led us to where we are today, on the verge of realising the ASEAN Community by the end of this year. That Community now consists of over 600 million people – the third largest workforce in the world, and poised to become a major global player.

9.     According to one estimate, ASEAN could constitute the fourth­largest market after the EU, US and China by 2030. That is only 15 years away.

10.     Greater integration has tangible rewards. Intra­ASEAN trade was US $458 billion in 2008, when the ASEAN Economic Community Blueprint came into effect. Last year, it had risen to $609 billion. With further elimination of barriers, these figures will rise still more. Intra­ASEAN trade is expected to rise from 24 percent of the total at the moment to 30 percent by 2020.

11.    In case that still seems a little abstract, let me put it in very clear terms. If we managed to raise that level of trade from 24 percent to 40 percent, the incremental impact on the ASEAN economy could be $2.5 trillion annually.

12.      The more we strengthen the ASEAN Community, the more we will gain: both from working with one another, and also from being able to act as one on the global stage, forging new agreements with large countries and other groups to the benefit of all.

But, ladies and gentlemen,

13.        Let me return to the Bangkok Declaration. It concludes with these words: “The Association represents the collective will of the nations of South­East Asia to secure for their peoples and for posterity the blessings of peace, freedom and prosperity.”

14.     We have chosen to emphasise the idea of a “People­Centred” ASEAN in 2015 under Malaysia’s chairmanship. But that sentence shows that ASEAN has always been about its peoples.

15.     It may, at times in its history, have appeared to operate more at the inter­governmental level. But the interests of its citizens have always been paramount – and the peace that ASEAN helped bring about and maintain has been a very real prize for the hundreds of millions in our region.

16.     Now, however, is the time to ensure that ASEAN is a part of our peoples’ daily lives. We need to raise awareness of ASEAN, its great achievements of the past and the brighter horizons for all it should bring about in the future.

17.        That is why I am delighted that the selection process has already begun for the first ASEAN Peoples’ Awards. These will celebrate the inspiring achievements and contributions made by ten outstanding ASEAN organisations and individuals, and will be presented at the next ASEAN Summit in Kuala Lumpur in November.

18.         It is important that we recognise and showcase those who are making a real difference in community­building. They may be people or groups that are already well­known, or they may be unsung heroes.

19.        But after they are honoured with these prestigious awards, I am sure that they will provide inspiration for the peoples of ASEAN, and be examples of what we can do when all of us – all of our many faiths and races ­ come together as one.

20.    For just as unity is vital at home – and here in Malaysia we know how necessary it is not to divide but to put the national interest first – ASEAN must continue to consolidate and build solidarity, unity and resilience.

21.     In this way, we can make sure that ASEAN takes its place as “the essential regional organisation in Asia”, as a leading international affairs think tank recently put it.

22.    Let us now join hands to forge ahead and build a long lasting, prosperous and inclusive future for ASEAN and its peoples.