In Thai Military Power: A Culture of Strategic Accommodation, Greg Raymond outlines the historical context and strategic thinking behind Thailand’s diplomatic and military posture. It is an engaging and thought-provoking book which provides a much-needed analysis of an influential middle power at a time when such key players in the Asian region should be receiving more attention. 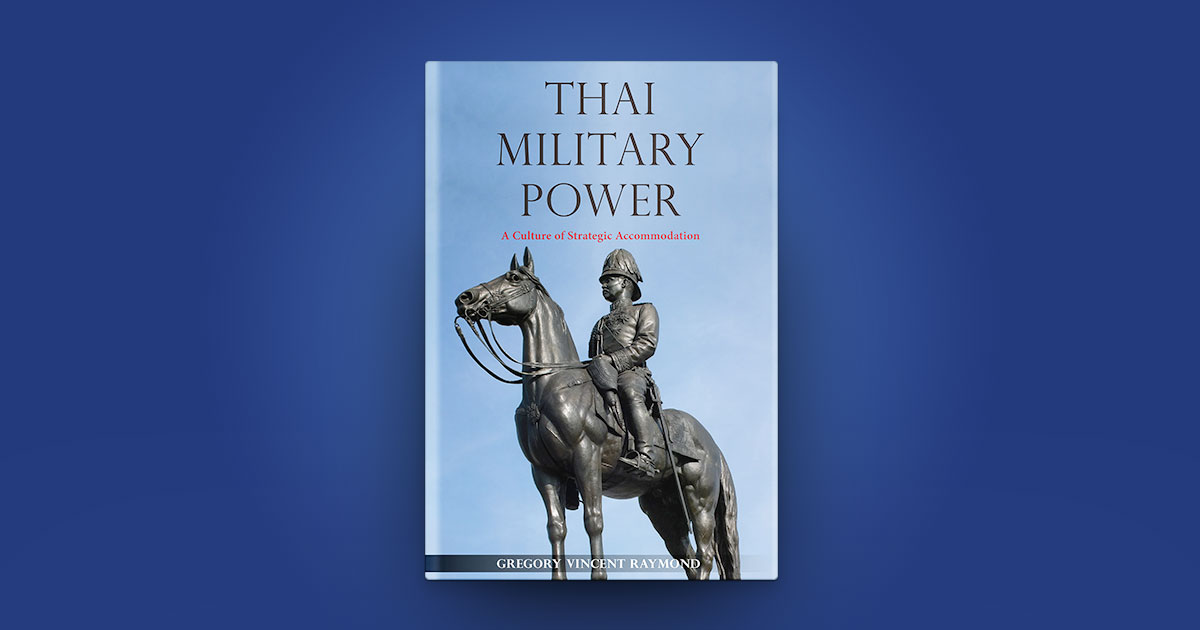 This is precisely the type of study Australians should be undertaking. We cannot continue to make bland generalisations about the objectives and anxieties of our neighbours in the Asian region. More sophisticated analysis is required, and it is necessary to know about not only China but also other key players. The dynamics in our neighbourhood are becoming increasingly complex and involve a wide range of states – each of which has its own history and strategic culture.

In choosing a case study of Thailand, Raymond asserts the importance of researching “subaltern states” which have “inscribed in their collective historical memories” the nationalist struggle against colonialism. The “outlooks” of such states, he argues, will be increasingly important to assess as “the global power shift continues to move away from the West.”

Raymond does not deny the variety of factors that might influence Thailand’s handling of international relations. These have included domestic political contests, economic imperatives, factionalism within the military and the changing interaction between the army and monarchy. It is “strategic culture,” however, which is his principal concern. He defines it as “public and shared symbols and narratives that concern matters of military force,” and he says it “consists of the politico-military mental models of history that decision-makers use to interpret the past and which limit thinking as to available policy options.” In the Thailand case, the strategic culture is “composed of two politico-military narratives,” both arising from security challenges of the past – and Raymond presents these two narratives in useful detail.

The first is the “fall of Ayutthaya narrative,” which refers to the sacking of the Thai state of Ayutthaya by the Burmese in 1767. It was a devastating conquest and – as often elaborated in school textbooks, popular cinema and cartoons – tends to be attributed to the disunity that had prevailed in the state’s leadership. The protecting of the state, so this narrative conveys, requires “establishing unity and an orderly, prosperous kingdom.”

The second narrative, which Raymond terms the “Deeds of Chulalongkorn,” concentrates on the trips of the Thai King Chulalongkorn (reigned 1868-1910) to European capitals, and emphasises “diplomacy with military force as a last resort,” The context of these trips was the threat to Siam from the European powers, especially with the Pak Nam incident of 1893. Here the French grabbed land from the east side of the Mekong after sailing up the Chao Phraya river and training their guns on the king’s palace – and then defeating the Thais in a brief skirmish. Following these traumatic events, King Chulalongkorn travelled to a long list of European capitals, conveying that his country was a civilised state deserving of respect. Just how large a role the king’s touring played in securing Thailand’s independence is unclear – but in the country’s social memory it is seen to have been vital.

The lessons from these developments were that it is important for Thailand to develop a military force and not just rely on diplomacy, and that diplomacy itself – and the “adept management of international relationships” – is of critical importance. The second message has been fully appreciated even by the country’s military. Thailand’s 2005 Defence White Paper, in fact, recalls that Chulalongkorn’s “strategy of diplomacy” had enabled Thailand “to survive as an independent nation till today.” Raymond comments that it “would be difficult to find another country whose defence planning documents attribute national survival to diplomacy and making friends.”

Delineating the features of a strategic culture is one matter, demonstrating its influence is another. Interviews with military officers and the analysis of public documents is helpful. For instance, when Thai leaders take pains to stress “harmony,” “consensus” and “reconciliation,” we can “reasonably infer that they are demonstrating the influence of the Ayutthaya narrative.” The main way Raymond tests the influence of the two narratives, however, is through four case studies. These involve decision-making in three crises: the First World War, the Vietnamese invasion of Cambodia in 1978-1989, and the 2008-2011 Thai-Cambodia temple dispute and an examination of Thailand’s record of defence spending.

Thailand’s contribution to the First World War was not substantial but it had the diplomatic advantage of strengthening the country’s “claim to a place in international society and the so-called family of nations.” In the Vietnam-Cambodia case, the evidence suggests that although the Thai military saw Vietnamese behaviour as threatening there was no significant increase in defence spending. The main Thailand response was diplomatic – drawing on the “alliance with the United States, moving closer to China, and leveraging its membership in ASEAN,” and all aimed at fostering “an inhospitable environment for Vietnam.” Taking next the 2008-2011 Thai-Cambodia issue, the “Thai security elites who managed the crisis still heeded Thailand’s historical practice of using force in a limited manner to achieve diplomatic objectives,” consistent with the “Deeds of Chulalongkorn narrative.” Finally, with respect to defence funding, Thailand has tended to show restraint – maintaining the military as “a minimum deterrent to foreign adventurism, and not as the first line of defence.” Here, clearly, diplomacy is given priority.

This is a really satisfying, convincing analysis (and written in a lucid manner that is enjoyable to read) – and it supports Raymond’s view of Thailand as a “subaltern, underbalancing and accommodative state.” The book is thought-provoking as well because of the questions it raises in the reader’s mind. One issue is how much Thailand has in common with other Southeast Asian countries. With respect to “underbalancing” – the tendency to respond to threats in a seemingly inadequate manner – Raymond notes that Indonesia as well as Thailand has failed to build alliances or military capacity in the face of a rising China. How many other countries take this approach? Also, we learn that a recent survey of 1,800 Thai military officers shows that they see the United States as a greater threat than China to their country. How common a viewpoint is this across Southeast Asia?

Further comparisons of interest include the figures on military spending. Thailand’s expenditure on the army in contrast to the navy and air force is high by Malaysian and Chinese standards. Thailand also funds a diplomatic service larger than those of other similar countries. In such contrasts as these, we gain a sharper appreciation of Thailand’s strategic identity – and also a starting point for the type of broader, sophisticated cross-regional analysis that can only benefit Australian policy-making.

The second line of inquiry which this book encourages concerns historical depth. The narratives which Raymond cites relate mainly to late 19th-century state building: the defeat of Ayutthaya was in 1767, but it seems to be mainly in the Chulalongkorn regime that this was formulated as an educational lesson. At one point, Raymond considers the way Rama III (1824-1851) responded to the expansion of Vietnam, and such inquiries provoke a desire to know more about pre-modern Thai foreign policy, even back into the Ayutthaya period (14th-18th centuries). How far do the roots of the modern strategic culture reach beyond the two narratives which Raymond highlights? Would it be profitable, one might add, to examine key strategic concepts deployed in old Thai chronicles or inscriptions?

It is an indication of the success of Raymond’s book that it stimulates the desire to know more. It is also likely to provoke specialists on other parts of Asia to ask which historical narratives remain influential in their target countries.

Raymond’s investigation has a clear practical significance for Australia. In addition, it contributes beautifully to “non-Western international relations,” a growing field of research in international studies – stimulated by Amitav Acharya, Barry Buzan and others – which is of far-reaching theoretical interest.

This article is published under a Creative Commons License and may be republished with attribution. First published on Australian Institute of International Affairs website.