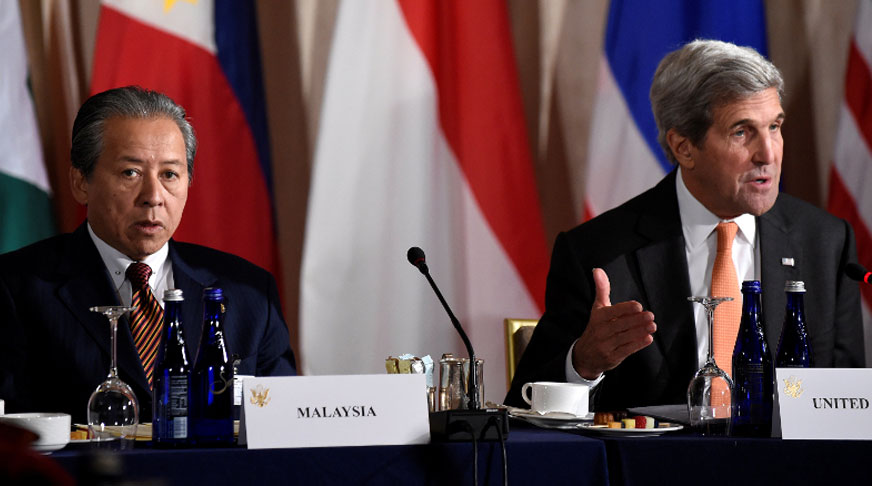 SECRETARY KERRY: Well, colleagues, welcome and good afternoon. I’m delighted to have a chance to be able to catch up to everybody, and thank you all for being here. Our time is a little bit limited, as you know, and our agenda is, as always, fairly unlimited, pretty substantial, so I’m going to jump right in if I can.

First of all, I want to thank Foreign Minister Anifah for co-hosting, and I particularly want to congratulate Foreign Minister Saleumxay for chairing our ministerial in Vientiane earlier this year. Laos did a superb job, I think everybody would agree, of hosting President Obama and the other leaders at the East Asia, U.S.-ASEAN summits, and the summits in September. So you guys were pretty busy, and we put you to the test and you did a tremendous job, and we thank you very, very much.

The heart of my message today is pretty straightforward: The United States views Asia as increasingly important, and ASEAN is an increasingly important, in.uential organization, and frankly central, to all of our objectives and our initiatives in Asia. And that’s why President Obama was the .rst United States president to meet together with all of the ASEAN leaders. It’s why we established a strategic partnership in 2015. And it’s why the President invited your leaders to Sunnylands for a special summit this past February. All of that was groundbreaking and all of that has made a di.erence to the ability of ASEAN to speak with strength and with a common sense of direction.

So the evidence of ASEAN’s growing role is really all around us.

We see it in our economic relationship, where U.S. investment in ASEAN countries has almost doubled in just the past eight years, and we have launched a strategic framework for our engagement with the ASEAN Economic Community through the US-ASEAN Connect Initiative.

We can also see it in the strengthening of our people-to-people – excuse me, our people-to-people ties through student exchanges and through President Obama’s Young Southeast Asian Leaders Initiative, and that now has, believe it or not, 100,000 participants. I met with some of these young folks when I’ve had a chance to be out there, and they’re really impressive. They are the future of each of your countries. And the technical and economic and global strategic sense these young people have is extremely impressive.

We can also see the increase of this relationship in the President’s decision last week to lift all the remaining sanctions against Myanmar in order to show U.S. support for strengthening democracy there and encouraging inclusive growth and in spurring investment in the civilian economy.

We can also see it in the steadily broadening of the number of issues on which we work together. You know that list now includes counterterrorism, climate change, human tra.cking, cyber security, and the promotion of sustainable .shery practices, and the larger economic set of initiatives that we’re all engaged in.

And as you know, we just concluded our third Our Ocean conference in Washington. I’m very, very delighted that the .fth is going to take place in two years in Indonesia, and we’re really delighted that Indonesia stepped up and wanted to take this responsibility on.

Finally, let me just say that we can see the centrality of ASEAN on Southeast Asian security issues. In the South China Sea, the United States believes that disputes over territorial integrity should be resolved peacefully and in accordance with clear legal principles and judgments, not by coercion. And we have an interest, and I believe a shared interest, in upholding international law and persuading all relevant nations to exercise restraint to reduce tensions.

Now, ASEAN has a very clear role to play here in completing the good work of negotiating a meaningful code of conduct, in discouraging the militarization of outposts, and in respecting diplomatic and legal mechanisms. On North Korea, we also share very similar interests. ASEAN, and just about the whole world, has rightly condemned the DPRK’s latest nuclear test as a threat to regional stability and is a blatant violation of multiple UN Security Council resolutions.

The United States will do whatever is necessary to defend our own citizens and to honor our security commitments to our allies. So every country has a responsibility to cooperate in vigorously enforcing the sanctions that have been imposed by the UN Security Council. And together, we have to ensure that the DPRK pays a price for its dangerous actions as part of the e.ort not to continually be at a position of sanctioning, but to make it clear to them they need to come to the negotiating table and they need to behave like every other law-abiding nation and work through the denuclearization of the peninsula.

So my colleagues, we have a lot to talk about; much to gain by continuing to work together. And this will be my .nal time representing the United States at a meeting with ASEAN as Secretary of State. But I have no doubt that whoever follows is going to build on the progress that we have made, and I want to thank all of you for the tremendous work and cooperation that we have been able to do together.

Next year, we will mark 40 years of the U.S.-ASEAN relationship, and I am absolutely con.dent that our work will become even more productive, and more united, more forceful, more impactful, over the course of the years to come. So thank you very much.

With that, let me ask Foreign Minister Anifah to make his comments and then we’ll ask the press to leave.

FOREIGN MINISTER ANIFAH: Thank you, Secretary Kerry, Your Excellency John Kerry, Secretary of State of the United States of America and co-chair for today’s informal ASEAN-U.S. ministerial meetings (inaudible). Ladies and gentlemen, on behalf of my ASEAN colleagues, I wish to thank Secretary Kerry and the Government of the United States of America for hosting this informal meeting; my appreciation, as well, to my ASEAN colleagues for your participations today. As Secretary Kerry has stated, we had a very fruitful fourth ASEAN-U.S. Summit in Laos earlier this month. Our leaders discussed the excellent state of our strategic partnership and ways to further strengthen our ties. I wish to thank to the U.S. for the following new initiative launched during this summit, namely USAID-State .ve-year counter wildlife tra.cking program and USAID’s Clean Power Asia program and YSEALI World of Food Innovation Challenge.

The summits, unfortunately, were the last that President Obama participated in his o.cial capacity as the U.S. President. He will be deeply missed by us in ASEAN. He was instrumental in the U.S. actively engaging this region again through his pivot to Asia policy. It was under his watch that ASEAN-U.S. direct relations were elevated to a strategic partnership. We hope that his successor will continue to positively and actively engage this region.

President Obama and Secretary Kerry’s e.orts, together with that of our ASEAN leaders, have rewarded us with excellent state of ASEAN-U.S. relations that we enjoy today. On Malaysia’s part, we are delighted with the state of our strategic partnership with burgeoning cooperations in all three pillars of the ASEAN community.

Malaysia, like all ASEAN member-states, appreciate the U.S. role in maintaining peace, security, stability, and prosperity in the region. We also appreciate the U.S. constructive role in helping us evolve a regional rule-based regional architecture via ASEAN-led mechanisms towards a greater sense of ASEAN centrality and unity. Our cooperations and regional and international issues, as well as the traditional and non-traditional challenges, have continued to deepen to cover myriad issues, including terrorism, cyber security, climate change, irregular migrants, and maritime matters, just to name a few.

And we look forward to working closely with the U.S. to continue enhancing our strategic partnership and all .elds of mutual interest. And as – we’re very sad to, as well as Secretary Kerry stated, that the – maybe this is his last time to be with us, but I can assure you, we fully appreciate what you have done for the region and for all the other ASEAN member-states. I thank you.

QUESTION: Mr. Secretary, are you meeting with Foreign Minister Lavrov in the next (inaudible)?

SECRETARY KERRY: I met with him. I met with the foreign minister. We have exchanged some ideas. I think we made a little bit of progress. We’re evaluating some mutual ideas in a constructive way, period.

Source: US Department of State