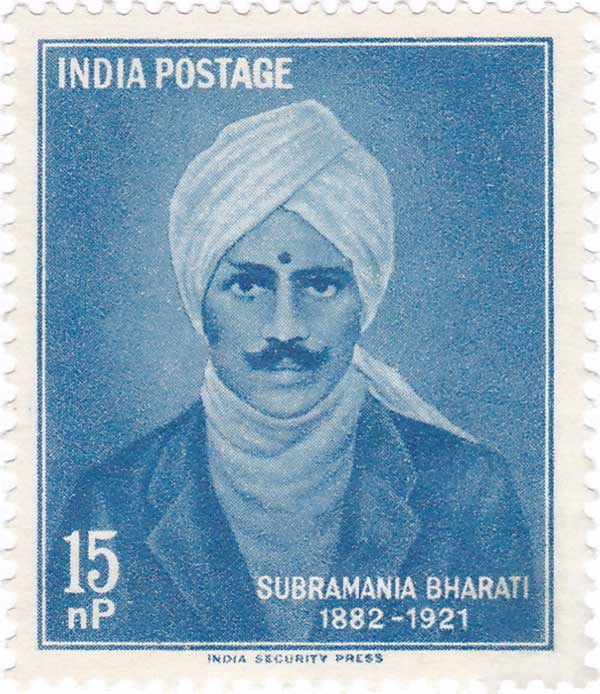 As India is celebrating 75 years of its independence, officially termed the Azadi Ka Amrit Mahotsav, contributions of our great freedom fighters, revolutionaries, philosophers, and unsung heroes are being brought to the centre stage and celebrated.

Next year, when these celebrations reach their zenith, India will also be celebrating the 140th birth anniversary of Chinnaswami Subramania Bharati (picture) – a great patriot and a poet.

Born on Dec 11, 1882, Bharati, aka Bharatiyar, was popularly called “Mahakavi” (great poet) as he is considered one of the finest Tamil poets recognised for his patriotic, revolutionary, and social reformist ideas.

The power of Mahakavi’s ideas can be glimpsed in that his works have inspired generations of academicians, actors, politicians, and laypersons alike. His life story itself ignites a deep sense of pride and awe among readers for his revolutionary ideas that were ahead of his time, along with a shroud of regret for his untimely demise.

Bharati’s works remain to this day a global literary gem full of ideas that transcend national boundaries aiming to address shared concerns of the international community. His poems, songs, and essays on freedom, feminism, social and gender equality are pertinent to date, despite being written more than a hundred years ago.

Bharati’s Pudhumai penn (the modern woman) is as applicable to Rosa Parks, Malala Yousafzai, Karima Baloch, Rahaf Mohammed, and Nirbhaya as it was to women of his time.

In the namesake song, he talks about women empowerment in its most fundamental form:

The vision that women must hold up half the sky is as elusive today as it was in Bharati’s time. His circumstances and the context in which he lived and wrote made Pudhumai penn one of the most contentious and trailblazing works of the time, and it is important to acknowledge this.

This is relevant even in this day and age, as Bharati’s Pudhumai penn remains aspirational for most contemporary societies.

The sin of castes

Bharati touches upon another equally monumental challenge that India and Indic communities face even today.

His Paapa paatu is a didactic and perhaps idealistic piece of work, considering the social context at the time of writing:

"Saathigal illaiyadi paapa (There are no castes and subcastes, child),
Kulath thaazhchi uyarchi sollal paavam (It is a sin to talk in terms of castes, good and bad),
Needhi, uyarndhamathi, kalvi, anbu (Justice, great intellect, education, and love),
Niraiya udaiyavargal maelor (Those who have, are indeed great)."

Bharati’s time saw a society bound severely by the caste system and a great many of his works sought to educate the masses on its evils. Paapa paatu was not only his way of appealing to the younger generation but also indicative of how casteism was deeply entrenched in society, to the point that children could inherit these caste-based “ideals”.

Today, transcending caste differences and discrimination has become a necessary pre-condition for India to become an economically egalitarian and societally inclusive developed power to reckon with.

Interestingly enough, caste barriers do not end at modern India’s territorial boundaries. The Indians who migrated to Southeast Asia and other parts of Asia and the Indian Ocean region during the pre-British and British imperial era brought the caste system along.

This is still subtly observed in the diaspora in countries such as Malaysia, Singapore, and Fiji - particularly in aspects of marriage, religious affairs, and societal institutions.

Perhaps this explains why Gandhi and Bharati’s writings stay relevant even in the 21st century. Ideals of true, progressive, and complete social reform have yet to be achieved among the Indian community in the country and elsewhere.

For Bharati - a polyglot who knew more than a dozen Indian and foreign languages - it was not difficult to fathom India’s role and responsibility in the international community. His ideas on how India should position itself in the international system were enlightened, and even perhaps ahead of his time.

He believed that India should have closer relations with immediate neighbours and engage in resource sharing. The “Neighbourhood first” policy of India, launched by the Narendra Modi government, attempts to achieve exactly those set of goals.

Mira T Sundararajan, great-granddaughter of Bharati, sums it up in the following:

“Internationalism was one of the keys to Bharati’s nationalism… For Bharati, nationalism never meant turning inward, focusing on national interest in the narrow sense to the exclusion of the world at large. On the contrary, the world’s problems were India’s, and India’s was the world’s…”

Bharati’s political thoughts and ideas are valuable and revolutionary, though it may be possible that they were drowned out or diminished due to several reasons. It could be that his didactic or literary works were better received, or these ideas were “lost in translation” due to language barriers.

Surely, Mahakavi’s works and ideas should also be recognised in that sense. More, to that end, must be done. The life and times of Mahakavi Bharati, though significantly chronicled, have not been adequately explored, nor has his works extensively interpreted through lenses other than literature.

Proponents of education and equality should strive to propagate the works of Mahakavi and celebrate his contributions to Indian society and polity.

This article was first published in Malaysiakini on Dec 12, 2021.