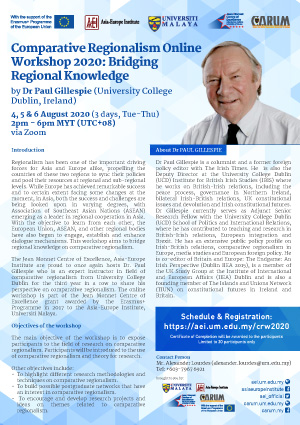 Regionalism has been one of the important driving forces for Asia and Europe alike, propelling the countries of these two regions to sync their policies and pool their resources at regional and sub-regional levels. While Europe has achieved remarkable success and to certain extent facing some changes at the moment, in Asia, both the success and challenges are being looked upon in varying degrees, with Association of Southeast Asian Nations (ASEAN) emerging as a leader in regional cooperation in Asia. With the objective to learn from each other, the European Union, ASEAN, and other regional bodies have also begun to engage, establish and enhance dialogue mechanisms. This workshop aims to bridge regional knowledge on comparative regionalism.

Objectives of the workshop 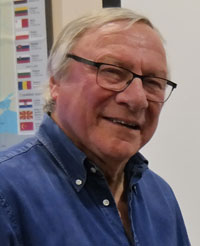 DR PAUL GILLESPIE
A columnist and leader writer on international affairs for The Irish Times (from which he retired as foreign policy editor in 2009), the Deputy Director at the Institute of British-Irish Studies, and a Senior Research Fellow adjunct in the School of Politics and International Relations, University of College Dublin. He was awarded his PhD from UCD in 2007 for a thesis on Multiple Political Identity and European Integration. His main research areas, journalism and publications are in European integration and political identities, comparative regionalism, Irish-British relations, Europe-Asia relations, media and foreign policy, and the EuroMed region. Recent publications include the chapter ‘Crises as drivers of integration in Europe and Asia: crisis as threat’ in Drivers of Integration and Regionalism in Europe and Asia and his co-edited volume with Daithi O’Ceallaigh, Britain and Europe: The Endgame, An Irish Perspective. 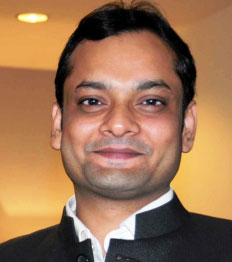 DR. RAHUL MISHRA
Senior Lecturer at the AEI and coordinator, International Master in European Regional Integration programme. Former Consultant with the Foreign Service Institute, Ministry of External Affairs, Government of India. Before joining the FSI, he worked with the Indian Council of World Affairs and IDSA for four years each. Recipient of the Asia Fellowship of the East-West Center in Washington D.C., and the Korean Government Fellowship, Dr. Mishra has also worked with RSIS (NTU) and NUS. He specialises on ASEAN regionalism, IR theory, politico-security affairs of the Southeast Asian region, and role of major & middle powers in the Indo-Pacific region especially in the context of rise of China. Publications include India’s Eastward Engagement from Antiquity to Act East Policy (with Prof. S.D. Muni, SAGE, 2019). His co-edited books include: The Peacock and the Garuda: An Overview of India-Indonesia Relations, BCIM-Economic Corridor: The Road Ahead, and Asia and Europe in the 21st Century New Anxieties, New Opportunities (forthcoming, co-edited with Prof. Azirah Hashim and Tony Milner, Routledge, 2020).

These readings are mostly drawn from The Oxford Handbook of Comparative Regionalism, edited by Tanja A. Borzel and Thomas Risse, Oxford: Oxford University Press, 2016. This is the most up to date and authoritative survey of the field. The readings include the title page and contents, to give students a sense of the range and scope of the field.

Dr Paul has selected the book's introductory chapter, ‘Framework of the Handbook and Conceptual Clarifications’, which gives an overview and, most important, a systematic definition of the terms region, regionalism, regionalisation, regional order and regional governance which he will use in the workshop.

The concluding chapter by Borzel and Risse, ‘Three cheers for Comparative Regionalism’, which valuably summarises and discusses the book’s main findings is also selected.

The chapters on Europe by Frank Schimmelfennig and on Asia by Anja Jetschke and Saori N. Katada, and an excellent chapter by Amitav Acharya on ‘Regionalism Beyond EU-Centrism’, whose title speaks for itself and makes an important point are also included.

Two other chapters in the Oxford Handbook will be referred to as raising topical issues in comparative regionalism: Jeffrey T. Checkel, ‘Regional Identities and Communities’, and Arie M. Kacowicz and Galia Press-Barnathan ‘Regional Security Governance’. Each chapter illustrates aspects of the comparative method we will also examine, with some supplementary texts at the workshop.

A recent article by Borzel and Risse updates a number of their positions: ‘Grand theories of integration and the challenges of comparative regionalism’, Journal of European Public Policy 2019, 26 (8): 1231-1252.

We will circulate a draft chapter of Dr Paul for a forthcoming book on The Indo-Pacific and Europe, and 'Crises as drivers of integration in Europe and Asia: crisis as threat' from Drivers of Integration and Regionalism in Europe and Asia, Comparative Perspectives, edited by Louis Brennan and Philomena Murray, Abingdon and New York: Routledge 2015.

We will also use the current issue of Asia Europe Journal 18 (2) June 2020 ‘Inaugural Asia Europe Policy Forum: COVID-19 and the Future of Asia-Europe Relations’ available at https://link.springer.com/journal/10308/18/2 as a good example of current policy discussion for research purposes.

Note: To be provided to the participants in due course.

Note: Participants who complete all 3 days of workshop will receive workshop certificate. Email zahadin@um.edu.my if your name is wrongly spelt.