Rapporteur's Report: Denmark and the EU

“Denmark and the EU”

The Jean Monnet Centre of Excellence Ambassador Lecture Series (JMALES) is a flagship event of the Asia-Europe Institute (AEI), Universiti Malaya. As a designated Jean Monnet Centre of Excellence, the AEI has conducted several such lectures since 2018, hosting the Ambassadors of Italy, France, Switzerland, Poland and Croatia among others. The JMALES is essentially a platform for knowledge sharing and an exchange of perspectives. It also presents an opportunity for Ambassadors to share their insights, experiences and views on diplomacy, foreign policy and international relations.

The online talk titled “Denmark and the EU” was presented by H.E. Kirsten Geelan, Ambassador of Denmark to Malaysia and was moderated by Dr. Rahul Mishra, senior lecturer and Coordinator, European Studies Programme the AEI. The session began with the welcome address from Asso. Prof. Dr. Jatswan Singh, Executive Director, AEI. He highlighted the importance of the JMALES, the AEI’s signature event each year and conveyed his sincere gratitude and appreciation to Ambassador Geelan for taking the time to attend the event. This was followed by a brief introduction of the Ambassador by Dr. Mishra. Ambassador Kirsten Rosenvold Geelan assumed her position as Ambassador of Denmark to Malaysia in September 2020. Prior to her assignment in Malaysia, she served as Ambassador to Hungary (2016-2020), Nepal (2013-2016), Republic of Cyprus (2011-2013), Bosnia and Herzegovina (2009-2011) and Republic of Estonia (2005-2009).

Ambassador Geelan started her presentation by introducing her home country, the Kingdom of Denmark. She pointed out that Denmark is often best known as one of the “happiest countries in the world” competing with neighbours in the Nordic region and based on common foundations of equality, diversity, social security and trust. Based in international standards Denmark ranks again in 2021 as the least corrupt in the world. This is the fifth consecutive year that Denmark comes up tops in the Corruption Perception Index (CPI) prepared by the Transparency International. A geographically small country with an open economy, Denmark has been a member state of the European Union (EU) since 1973 and the North Atlantic Treaty Organization (NATO) since 1949. Ambassador Geelan highlighted that Denmark has a history where the government works closely with the private sector, academia and companies with the sole aim of optimizing industrial growth and inflation. Denmark’s focus for many years have been “green solutions”, particularly, energy efficiency, waste management, water infrastructure and climate change adaptation. In fact, it is interesting to note, as pointed out by Ambassador Geelan, that Denmark’s exports in energy technology and sustainable solutions alone, account for about 13.5 percent of total Danish exports. 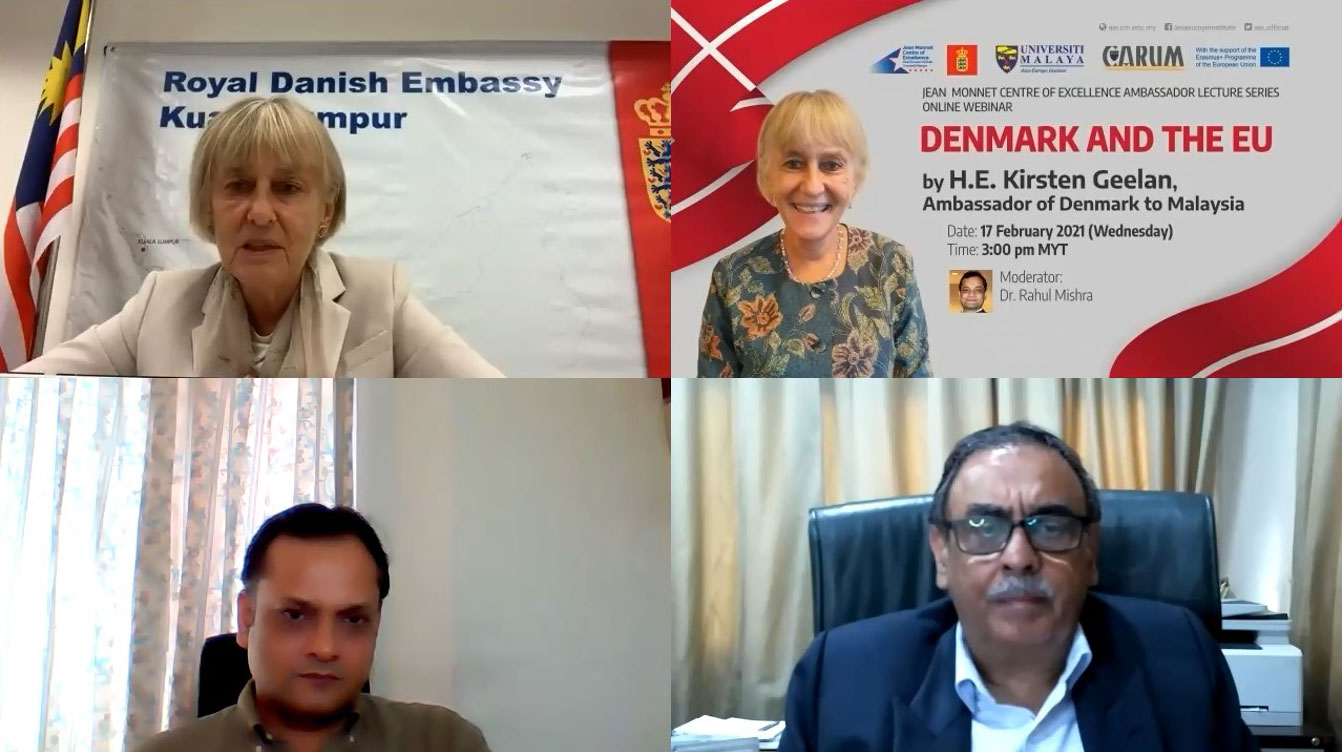 Denmark’s membership in the EU is one of the cornerstones in Danish foreign policy. The Ambassador highlighted how different the EU is from other regional partnerships such as the Asia-Pacific Economic Cooperation (APEC) or the Association of Southeast Asian Nations (ASEAN). The EU, she emphasised, was formed as a “peace project” after World War II through facilitating economic growth, people-to-people connectivity through open borders and ensuring sustainable development. As a member of the EU each member state has to subject some of the country´s power to the EU - as the organisation is based on supranational law with the European Court of Justice as the final interpreter of the Treaties of the European Union, national laws and national courts. Vastly different from ASEAN, for example, which is guided by the principles of non-interference, mutual respect for sovereignty, territorial integrity, and national identity of all nations.

Denmark has “opted-out” of certain EU policies such as the common currency or the EURO, common security and defence and justice and home affairs. The “opt outs” reflect the outcomes of several national referenda.

As concerns EU’s Common Foreign and Security Policy (CFSP), the Ambassador highlighted how the EU member states have “one voice” on EU´s foreign policy including on trade, human rights, migration, etc. The EU’s position on Malaysian exports of palm oil is a good example where EU member countries have a common position.

Bilateral trade relations between Denmark and Malaysia remain significant. Malaysia have been a substantial trading partner in ASEAN for Denmark. In 2019, exports from Denmark to Malaysia was estimated close to RM1.1 billion while imports from Malaysia stood at RM 1 billion and RM1.2 billion worth of goods and services, respectively. Interestingly, there are more than 75 Danish companies in Malaysia, often with their regional headquarters in Malaysia. Ambassador Geelan attributes this to Malaysia’s strategic location, stable labour force and the conducive business environment that exists in the country. Some big names are: Maersk, Carlsberg, Novo Nordisk and also the household favourite, Sunquick.

The Danish International Development Agency (DANIDA) was very active in Malaysia from 1994 to 2010 – financing numbers of sustainable programmes and activities promoting a green agenda and even spearheading and being instrumental in the sustainable green policy framework in Malaysia.

In terms of the current state of the Covid-19 Pandemic the common denominator in Denmark, Malaysia and all over the world the main priority is to stem the spread and now increasingly to vaccinate in order to secure the welfare and well-being of people. In addition to kick starting the private sector. For Denmark the focus is to continue “greening the economy” and the hope is that this will also resonate in Malaysia and for Danish companies to further cement their stronghold in the country.

As the webinar progressed into the Q/A session, Dr. Mishra began by asking Ambassador Geelan what she thought would be the long term impact of the sustainable green policy framework and if Denmark would continue working on this with Malaysia five to ten years from now; would these initiatives then percolate to civil society – to the common people? Dr. Mishra followed up by asking what Ambassador Geelan thought was “untapped potential” in terms of trade or investment opportunities between Malaysia and Denmark. Ambassador Geelan articulated Denmark’s commitment to “greening” the economy and prioritizing energy efficiency and sustainability – a focus for decades after the drastic effects of the oil crisis in the 1970s. Since then, Denmark has taken careful, calculated and systematic steps towards a “green” economy with a special emphasis on improving wind energy infrastructure and with extensive cross border connectivity - with countries in the region. With the most recent stimulus package of the EU Governments have taken an important step towards sustainable green economy.

Furthermore the Ambassador mentioned new potential trade areas where Malaysia and Denmark could collaborate even more with Malaysian Information Technology (IT) services sector ready playing an important role servicing Danish companies. Also very sophisticated biotech companies such as Novo Nordisk and Novozymes have moved part of their operations to Malaysia. In addition to a growing market in the health systems sector - where Danish companies and expertise are ready to engage.

Ambassador Geelan further addressed questions from the audience, particularly some important questions regarding opportunities for Malaysian start-up businesses in Denmark, funding opportunities for Malaysian Civil Society Organisations (CSOs) from the Royal Danish Embassy in KL, Denmark’s outlook on Malaysia’s current state of emergency and also tourism in Denmark for Malaysians. According to Ambassador Geelan, although Denmark welcomes start-up businesses, there is no tailor-made programme per se or any specific financial programmes, where start-up companies from the ASEAN region can “set up shop” in Denmark. As for funding opportunities for the Malaysian CSOs, the Ambassador explained that the EU has always been open to supporting initiatives from the region, especially those that relate to sustainable development. Member countries are involved indirectly as contributors to funds offered by the EU. Ambassador Geelan urged that CSOs that wished to tap into these opportunities could also relay their applications to the individual embassies.

The Pandemic is having an effect on the business community – with changing rules and regulations - in addition to communication with government agencies being rather challenging. She agreed, however, that businesses must be able to adapt in the changing environment, especially because the effects of the Covid-19 pandemic would last for some time.

On the topic of tourism, Ambassador Geelan stated that it is hopefully just a matter of time, before the world will slowly be returning to a more ”normal”. Once international travel resumes, Denmark will be happy to welcome tourists.

Another question directed to the Ambassador was on the topic of China and how “Europe goes Chinese”. In her respons she Ambassador again highlighted that Denmark is a small trading nation with an open economy for whom transparency and a level playing field is key. In Denmark the decision was taken already not to invite on Chinese 5G technology company – Huawei.

The session concluded with closing remarks and vote of thanks from Dr. Mishra who lauded the event as a timely opportunity to understand Denmark’s perception of the EU and the Denmark-Malaysia relations.

(Yanitha Meena Louis is a doctoral candidate at the Asia-Europe Institute, Universiti Malaya.)