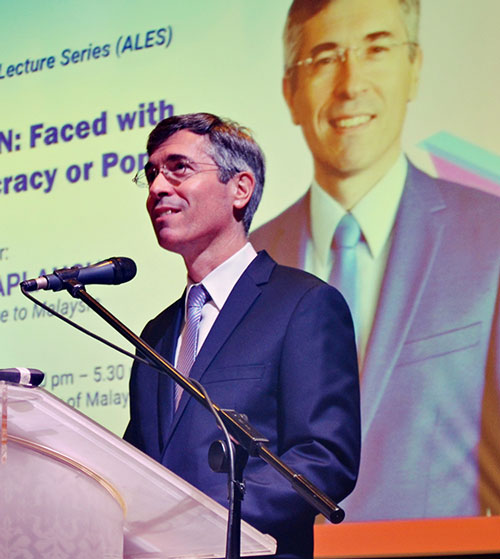 This year’s Jean Monnet Ambassador Lecture Series (ALES) started with a lecture by His Excellency Frederic Laplanche, the Ambassador of France to Malaysia. The lecture was held at the Auditorium, Asia-Europe Institute on 30th January 2019. The event was well-attended: the audience included more than a hundred people; ambassadors from various countries, high government officials, academics, representatives from the mass media, representatives from NGOs and, of course, students, attended the lecture. The lecture and the following Q&A session lasted from 3:30pm until 5:30pm.

H.E. Ambassador Frederic Laplanche began the lecture by expressing his gratitude for being invited to give the talk at the Asia-Europe Institute. He further elaborated that, initially, he was requested to deliver a lecture on the Brexit. However, upon some deliberation, he came up with an alternative topic for his lecture, which was “The EU and ASEAN: Faced with the choice of democracy or populism”. As H.E. Ambassador Frederic Laplanche explained, populism is a matter of domestic politics, not a subject of international politics. However, populism could be a more challenging and pressing issue to tackle because a country’s domestic policy would have a strong impact on its foreign policy. Currently, alarms are sounding all over Europe about the rise and spread of populism in every corner of the continent. However, upon being elected to the office, some European “populists” are unable to proceed with implementing their “populist” policies either due to the political compromises they have to make or—and this is more often the case— because their populist policies are simply not implementable. In France, the people rejected populist politicians during the country’s presidential election in May 2017, when Emmanuel Macron was elected a new president of France.

H.E. Ambassador Frederic Laplanche proceeded to clarify that he may not offer an exact and all-encompassing definition of populism in his lecture. However, he would attempt to highlight and describe some main characteristics of populism. Firstly, as he pointed out, populism involves the rejection of the elite. Populists claim that all elites are self-serving and, therefore, they do not serve the interests of common people. Populist politicians assume the role of the “spokesperson” for the ordinary citizens to condemn the self-serving elite. They often speak in a “straightforward” way without observing political correctness or using “indirect” statements. Secondly, as H.E. Ambassador Frederic Laplanche proceeded to explain, populism is the rejection of liberal democracy. In this aspect, populism could be compared to the authoritarian rule in which a “strong man” uses the “strong hand” to conduct and control the country’s politics. Thirdly, populism is the rejection of the mass media. The mass media establishes and maintains a “checks and balances” system for strong politicians. Populists condemn the mass media as not serving the people interests and not reflecting the people’s voice. Instead, populists prefer using the social media, such as Twitter or Facebook, to spread their version of events or information. Fourthly, populism involves a denial of the “secondary” effects. As H.E. Ambassador Frederic Laplanche maintained, populists tend to focus on the “primary effects” or direct effects of a policy and ignore the “secondary” or indirect effects. Finally, populism rejects globalism. Populists maintain that globalism will destroy the livelihood of ordinary people. He cited an example of the “yellow vests” movement which began in France in November 2018, when people started demonstrating against the rise of fuel prices. The movement started in Paris and soon spread all over France. In response, President Emmanuel Macron, among other measures, promised to have a town hall discussion known as the Grand National Debate to discuss and deal with various problems facing the nation, including the fuel price rise.

Despite the rise of populism, H.E. Ambassador Frederic Laplanche noted some positive aspects in the EU political situation. Firstly, in recent years the EU countries have maintained a relatively high economic growth of 2%, which indicates that people’s economic wellbeing has improved. Secondly, people in the EU continue to give their support to the ideas of the EU and believe in the EU future. Traditionally, as statistics has showed, support for the EU ideas was the weakest in the United Kingdom. However, even after the Brexit referendum in 2016, the approval rate for free movement of the EU citizens remains high in the UK and in 2018 it exceeded 70%.

In this public lecture, Dato’ M’ Redzuan Kushairi, Senior Advisor of AEI, was the moderator, and AEI’s Associate Professor Dr. Sameer Kumar was the discussant; he summarized the main points raised in the Ambassador’s talk and provided some insightful comments. Dr. Nurliana Kamaruddin was the master of ceremony.