Report on the Eminent Person Lecture Series Presented by The Honorable Richard Bruton, Minister for Education and Skills of Ireland

Higher Education and IR 4.0: Impact on Economy, Business and Society

by The Hon. Richard Bruton, Minister for Education and Skills of Ireland

The Jean Monnet Centre of Excellence Asia-Europe Institute in collaboration with the Embassy of Ireland Kuala Lumpur had the honour of hosting the Honourable Richard Bruton, the Minister of Education and Skills Ireland in an Eminent Person Lecture Series organised at the Auditorium of the Asia-Europe Institute University of Malaya on 19 September 2018. The minister spoke on the Irish experience of Higher Education and stressed the long education connections between both Ireland and Malaysia. In particular, the minister mentioned that recently a significant number of Malaysian doctors have been trained in Ireland, proving the close relationship between both countries. 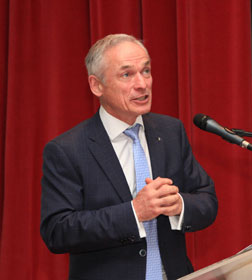 The Honorable Richard Bruton, Minister for Education and Skills of Ireland

The minister also talked about the rapid changes that are currently happening in many sectors such as development in computer power, big data, automation, the internet of things (IoT) and artificial intelligence. All of these are transforming many sectors including education making it unrecognisable in many ways from what it was before. Furthermore, the minister expressed his delight that the document on Framing Malaysian Higher Education 4.0 Future-Proof Talent has articulated the challenges faced in the education system effectively. One of the points that caught his attention while reading the document was that according to the document, by 2050 today’s knowledge will represent only 1 % of the available information. According to Minister Richard Bruton, this is indeed a huge challenge but also presents an opportunity to shape the impact of these powerful technologies on the way we live and work. There is a need to make sure that we harness the power of technology to build new economic models for both the economy and society which would allow people to thrive and flourish. It is definitely a huge challenge for those in governments to address that the impact of these technologies accordingly for the benefit of the people and society.

In relation to the topic of his public lecture on Higher Education and IR 4.0: Impact on Economy, Business and Society, Minister Bruton mentioned that responding to 4th Industrial Revolution is not actually a new challenge. In many ways the challenge of adapting to the 4th Industrial Revolution goes back to that core of education itself which is not about filling up ones’ brain with knowledge and then regurgitating it out during exams because education is about training ones’ brain to light a fire and charge them with more curiosity so that one would have the tools to research and solve problems. The minister said this in reference to the quote by William Butler Yates, a famous Irish poet, who said that “Education is not the filling of a pail, but it is the lighting of a fire”. In addition, the minister also pointed out that the education sector has been slow to transform the learning environment in adapting to technologies in comparison to the health sector. This is because the advancements of technology involving the health sector are very different from what it was 10 years ago, while the teaching environment in the education sector in pretty much the same without much advancement.

Other than challenges to the education sector as a whole, the minister also stressed that the 4th Industrial Revolution puts a hugely different demand on students as well and the sort of competences that they would need to develop through their education. Students would need the capacity to be problem solvers, work in teams, use the tools that they have learnt flexibly and applied them to problems according to the different demands. The student will also need to be good communicators and would need to work creatively as well. Another pressing challenge is educating citizens to use the power of access to information in a safer, respectable and discerning way. There is a need to create citizens who are more discerning while accessing information so they are not be influenced by fake news nor should they be angry about issues on social media without proper clarity and evidence.

Furthermore, the minister also pointed out huge challenges that might be faced by enterprises’ as their demands might differ from the education sector. The enterprises might have to build an entirely new relationship with the education sector, something they might not have needed to before. Building this relationship is important to ensure a system that fosters a culture of communication between enterprises and the higher education sector so that both are on the same page in terms of their demands. In addition to partnerships, enterprises would also need to open more placements for job opportunities and should also shoulder the responsibility of developing their own talents because, often times, smaller enterprise do not have the habit of doing this. The minister also added that academic institution themselves would need to play an important role in responding to the challenge by being more flexible in designing the curriculums and also flexible in the way the deliver or teach it to the students. This is because often times, colleges and universities have been slow to develop a more flexible system of delivery. This would cater to those who are planning to pursue their studies at an older age in line with the need for life-long learning as well as for those who wish to refresh their skills and knowledge.

The minister also emphasized the importance of cultivating knowledge transfer and commercialisation within the education system. It is easy to create world-class research but that same research would need to be applicable or at least relate to the competitive advantage of a particular country in order to ensure that research has a significant impact. These are the challenges in the relationships between education and enterprises that need to be addressed effectively. The minister went on to point out that within education itself, there are huge challenges due to the evolution of the curriculum. There is a need to cultivate curiosity rather than memory retention. The contents of a subject matter should not be about learning for the purpose of answering tests but instead learning to build capabilities. Assessment methods need to be reformed so that teachers and educators are not constrained to merely assessing their students based on examinations alone but also through broader project-based work. This would encourage the development of skills such as teamwork, communication as well as to enhance learning curiosity. The development of a holistic curriculum and assessment methods would fuel the brains needed for the 4th Industrial Revolution. Minister Bruton also talked about the flipped classrooms which are already becoming a trend at the moment. He pointed out that learning will no longer be about the educators being right all the time as students will start shaping the education system. It will be the students’ own curiosity and research as well as their discussions or engagements with each other that would create the content for learning. This comes back to the challenge of how the higher education system and also the education system in its entirety can harness the power of digital technology to deliver in its own sector. It will no longer be about creating people with the capacity to work in other sectors transformed by digital technology, but the education sector should be at the forefront of demonstrating the transformation.

Minister Bruton also went on to share some steps that can be taken to create change within an organisation or ministry. In order to change a system, there needs to be a bold or even a realistic ambition that can be articulated in a smart and measurable way. This bold ambition is needed in ministries seeking to make changes because the real challenge is also in uniting people to achieve a particular target. Another change that should be undertaken by the ministries is delivering results on a time-measured basis, meaning that the ministry is accountable to the results which should be reported publicly whether the results were achieved in a timely manner. Although having plans, visions and ambitions for a particular cause is important, the real challenge is always implementation. Another change that should take place is that people should have the confidence to fail. Failure should be regarded as part of a learning process and not be viewed as something disastrous. Failure would enhance bravery and indirectly promote, as well as encourage, innovation among the people and leaders. Minister Bruton quoted another Irish writer, James Joyce who mentions that “errors are the fortunes of discovery” which is indeed the truth because it is normally through errors that people would learn the most. Furthermore, benchmarking ourselves and with outside countries is also an important step that should be undertaken by countries at the organisational level and the minister mentioned Malaysia being one of the countries that are indeed keen to do so. Benchmarking allows you to see how others have confronted problems and challenges. Benchmarking would also stimulate improvements and raise the question of becoming better by adopting some of the good examples of other countries into our own systems. The Honorable Minister also was kind enough to share some of the practices within the education sector in Ireland on how they have faced challenges on the current era of rapid change that could be useful in the Malaysian context.